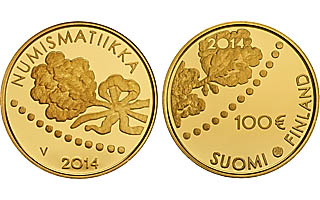 Finland launches its only gold coin of 2014 on April 11. The €100 coin marks the 150th anniversary of the first Finnish mark coin, and the hobby of coin collecting in general.

Coin collectors receive their due on a new coin from the Mint of Finland.

The Mint of Finland announced March 28 that a new Proof gold €100 coin would commemorate the first Finnish mark coin and the hobby of coin collecting.

The coin is scheduled to be released April 11 and is the only Finnish gold coin to be struck in 2014.

The first Finnish mark was struck in silver at the Mint of Finland on Oct. 15, 1864. The obverse of that 19th century coin depicts the two-headed Russian eagle with the lion coat of arms of Finland on the shield at its center.

The oak leaves and decorative ribbon encircling the 19th century silver mark’s reverse are repeated on the new First Mark and Numismatics collector coin. The design of the new coin, emblematic of the historical design, stretches across both sides.

“This gold coin reminds us of the importance that nations traditionally attach to metal coins. The messages in metal convey the values of their era across centuries, even millennia,” says Henna Karjalainen, communications director at the Mint of Finland.

Finns have been collecting coins for more than 300 years.

“Finland’s first numismatic publication was published in 1745. The coin and medal collection of the Academy in Turku was begun in 1747, and the first known private collections also started in the 18th century,” says Tuukka Talvio, keeper of the Coin Cabinet at the Finnish National Museum.

Today, Finns of all ages collect and study coins, according to the Mint of Finland.

The new €100 coin was designed by artist Hannu Veijalainen. It will be composed of .917 fine gold, measure 22 millimeters in diameter and weigh 5.65 grams.

The coin has a mintage limit of 6,000 pieces. Standard examples, packaged in a wood box, will retail for €440. A numbered special edition of the commemorative coin, packed in Vitriini glass cases designed by Iittala, will retail for €600.