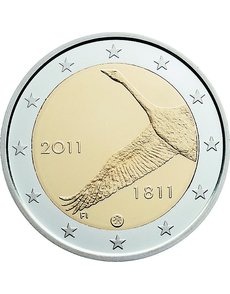 If the design for Finland’s circulating commemorative €2 coin for 2011 looks familiar, there’s good reason: it was already used on a gold coin earlier this year.

The Mint of Finland confirmed Aug. 31 that the circulating base metal €2 coin, due for release Oct. 27, will feature the swan motif celebrating the 200th anniversary of Bank of Finland, by designer Hannu Veijalainen, that was used for a Proof .917 fine gold €100 coin issued in May.

Symbolism on the “Siivet kantaa” (Spread Wings) design hails back to the golden age of Finnish art, according to the Mint of Finland.

The swan has been the Finnish emblem for hundreds of years, and has been used as the theme of both Finnish notes and coins in the past.

A portion of a swan in flight appears on the national side, with the dates 2011 and 1811 flanking it, left and right. The Mint of Finland’s mark, and the shorthand fi (for Finland), also appear.

The Bank of Finland’s roots are in the “Waihetus- Laina- ja Depositioni-Contori” (Exchange, Lending and Deposits Bureau), which was established in the former capital city of Turku in 1811 under the decree of Tsar Alexander I.

A total of 1.5 million coins will be released into circulation.

The Mint of Finland will offer collectors multiple packaging options. Uncirculated examples will be offered in 10-coin circulation coin purses and in packages containing five rolls of the coin (the quantity in each roll is unspecified).

In addition, individual Proof examples will be offered.

Coins in both finishes will be available in respective BU or Proof sets containing examples of the circulating coin designs, to be released at a later date.

For more information about the Mint of Finland and its coins, visit an English version of its website, www.suomenrahapaja.fi/eng/.

On the national or commemorative side of each €2 coin, the 12 stars of the European Union flag appear on the outer ring, with the commemorative design assigned to the center piece. ¦