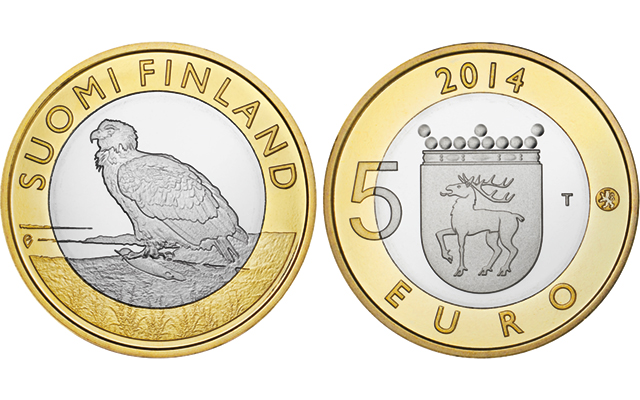 The Mint of Finland has issued the third coin in its Provincial Animals series, this time celebrating the white-tailed eagle found in Åland. 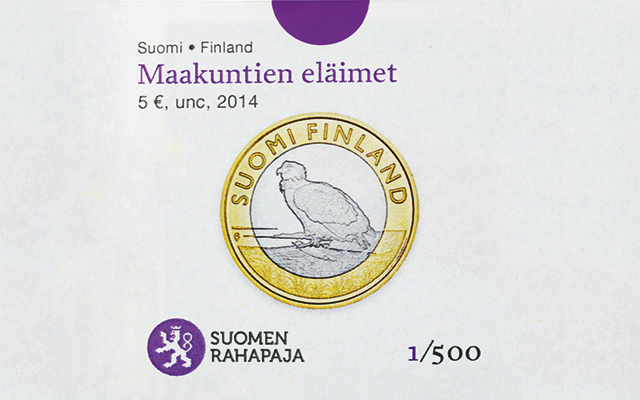 A total of 500 Uncirculated examples are available in a numbered cardboard packaging with a certificate of authenticity enclosed.

The Mint of Finland on Aug. 18 released the third €5 coin in its Provincial Animals series.

The newest ringed bimetallic coin, showing the white-tailed eagle in its nest, honors Åland. It follows the May 27 release of coins for Karelia and Savonia.

Åland, an archipelago of some 20,000 islands, is an autonomous province of Finland.

All of the coins in the series show the emblematic animals of Finland’s historical provinces on the obverse, with the respective historic provincial coat of arms on the reverse.

A collector coin marking Finland Proper is slated for release in September, with provincial animal coins for Satakunta, Ostrobothnia, Uusimaa, Lapland, Tavastia and Savonia scheduled for release in 2015.

The Provincial Animals theme is the third to celebrate Finland’s historic provinces, following a Provincial Buildings series issued in 2012 and 2013. Preceding that was the first series, issued in 2010 and 2011, which was simply meant to honor some aspect of provincial culture.

The newest Provincial Animals coin is the third celebrating Åland, with the first coin, released in 2011, honoring the tradition of fishing, and the second, released in 2013, depicting the province's Sälskär lighthouse.

The ringed bimetallic coins have a copper-aluminum-nickel ring and a copper-nickel core. They weigh 9.8 grams and measure 27.25 millimeters in diameter.

The €5 coins are not intended to circulate, but are offered at face value from the Mint of Finland.

There are three options for collectors who want to purchase the coins.

Proof examples, packaged in a protective transparent casing set in a package that tells the coin’s story, are available for €22 each.

To order from the Mint of Finland’s online shop, visit the mint’s website.