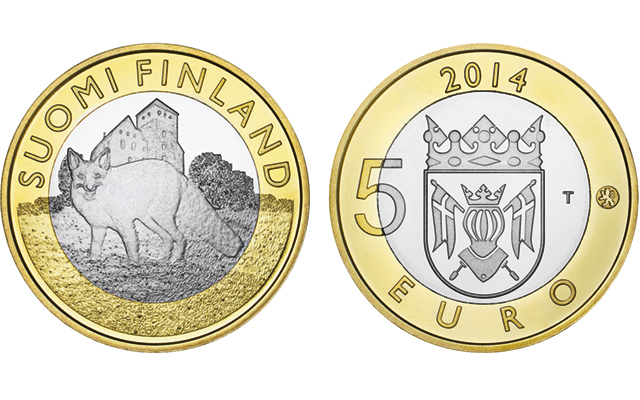 Finland’s latest coin in a provincial series celebrates the fox and Turku Castle, both emblematic of Finland Proper.

The Mint of Finland’s newest coin in a series honoring animals of the nation’s historic provinces celebrates the fox.

On Sept. 29, the Mint of Finland will release the new 2014 ringed-bimetallic €5 coin for the southwestern province called Finland Proper. The new issue is the fourth coin in the Provincial Animals program. The coin’s design also shows Turku Castle in the background, and the reverse bears the historic coat of arms of Finland Proper.

The fox is found all over Finland, but is the emblematic animal of Finland Proper, according to the Mint of Finland.

The Provincial Animals theme is the third to celebrate Finland’s historic provinces, following a Provincial Buildings series issued in 2012 and 2013. Preceding that was the first series, issued in 2010 and 2011, which was meant to honor some aspect of each province's culture.

”Provincial coins have made Finnish people look at their coins more closely and think about the stories they tell,” according to the Mint of Finland Communications Director Henna Karjalainen.

The newest coin follows the Aug. 18 release of the Provincial Animals series coin for Åland, and the May 27 issue of those for Karelia and Savonia. The series’ remaining five collector coins, for the provinces of Satakunta, Ostrobothnia, Uusimaa, Lapland and Häme, are due for release in 2015.

The coins are composed of a copper-aluminum-nickel ring and a copper-nickel core. They weigh 9.8 grams and measure 27.25 millimeters in diameter.

The obverse side of all of the Provincial Animal coins are designed by Erkki Vainio and the reverse by Nora Tapper.

The €5 coins are not intended to circulate, but are offered at face value from the Mint of Finland, as well as in several premium-priced options aimed at collectors.

Collectors can purchase the coins in three options.

Proof examples, packaged in a protective transparent casing set in a package that tells the coin’s story, are available for €22 each.

To order from the Mint of Finland’s online shop, visit the mint’s website.