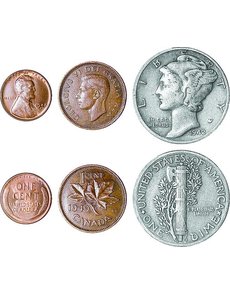 The coins of Switzerland fascinate me. For one thing, the designs used on some Swiss coins remind me of the designs featured on some older coins of the United States.

Take for example, this 1953-B 10-rappen coin of Switzerland struck at the Bern Mint that emerged from a roll of what should have been all United States cents.

It bears an obverse that features the date, an allegorical portrait of Liberty wearing a crown (headdress) that carries the word LIBERTAS (Freedom), and the portrait itself surrounded by the inscription CONFOEDERATIO HELVETICA (Swiss Confederation).

To my eyes, if you replace the legend around the obverse portrait with the words UNITED STATES OF AMERICA and then replace the word LIBERTAS as seen on the crown with LIBERTY, you have a coin that looks very much like the coins that we lovingly categorize in the Barber series of United States silver coins.

The reverse of the coin depicts the numerical value of the coin (10) within a wreath and, in the case of this coin, a B Mint mark (for Bern) is seen under the ribbon.

On the reverse, the devices are, again, very reminiscent of some of the designs used on early series of United States coinage, like Seated Liberty and Barber dimes. Even our Flying Eagle and Indian Head cents bear a striking resemblance to these coins of Switzerland.

Another thing that I truly find interesting about these coins is that, as on many other types of Swiss coins, the designs have been the same for well over 100 years and are still the same today.

The next unusual coin to be found was discovered in a roll of United States 5-cent pieces. It is truly a “square peg in a round hole,” so to speak. In fact the coin is struck on a square planchet.

Sometimes referred to as quadrangular (four-sided), the obverse features the coat of arms of the Netherlands Antilles and the motto LIBERTATE UNANIMUS, which, when translated from Latin, means “Unified by Freedom.”

The reverse features the face value, 5 CENT, flanked by six stars. The stars represented the six island territories that were a part of the Netherlands Antilles when the coin was struck.

Please share your finds with me by going to askaboutcoins.com.