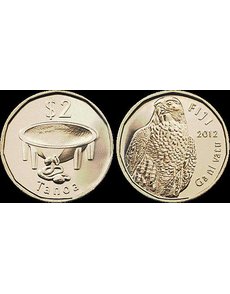 Fiji’s new coins and paper money are missing an element that has defined their designs for nearly 80 years.

Symbols of Fiji’s flora and fauna replace a portrait of the British monarch. An image of Queen Elizabeth II most recently adorned obverses of the coins and faces of the bank notes, but no longer.

As a past member of the British Commonwealth, Fiji displayed an image or reference to the monarchy on the nation’s money since 1934. (Fiji’s membership in the Commonwealth was suspended in 2009.)

According to ABC Radio Australia, the design changes angered native chiefs, who honor the British monarchy; natives ceded the island to Queen Victoria in 1874. Fiji received independence in 1970 and has undergone multiple military coups, but Queen Elizabeth II remains Tui Viti, or Queen of Fiji.

The new coins and notes are expected to begin circulating in January.

All of the coins retain the reverse designs already in use; the coins also have the same specifications as introduced in 2009.

The obverse of the 5-cent coin features a nuqa-roro (the bicolor foxface rabbitfish), and the reverse has a lali (drum).

A beka-mirimiri (Fiji flying fox, a species of bat) appears on the obverse of the 10-cent coin, which features an I ulã tavatava (throwing club) on the reverse.

A kakã (kadavu shining parrot) appears on the obverse of the 20-cent coin, and the reverse shows a tabua (whale’s tooth).

The 50-cent coin obverse shows a varivoce (humphead wrasse), with a camakau (traditional outrigger canoe) on the reverse.

The $1 coin features a vokai (banded iguana) on the obverse, with a saqãmoli (drinking vessel) on the reverse.

The $2 coin, which replaces a note of the same denomination, mimics the specifications of the Canadian $1 coin (the Royal Canadian Mint produced the coins). It shows a ga ni vatu (peregrine falcon) on the obverse and a tanoa (kava bowl) on the reverse.

The $5 note is predominantly green in color and shows Fiji’s kulawai (red-throated lorikeet) on its face. The back shows the endangered crested iguana, plants and Mount Valili.

The purple $10 note shows a freshwater fish, the beli (Lever’s goby). The back features the Grand Pacific Hotel in Suva as it appeared in 1914 and Joske’s Thumb (a volcanic plug).

The $50 note, in orange, features the tagimoucia (Medinilla waterhousei) flower on the face with a whale’s tooth necklace, and a tabua and yaqona vakaturaga (gathering of chiefs) ceremony on the back.

The yellow $100 note shows Fiji’s nanai (cicada) and a buli kula (golden cowrie), while the back features the map of Fiji with the 180º Meridian Line marking the dawn of a new day, and images representing tourism. ¦