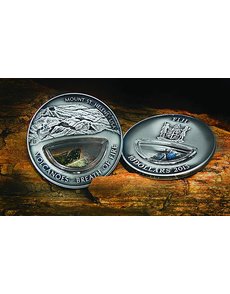 Mount St. Helens erupted May 18, 1980, the peak of volcanic activity in the mountain that is part of the Cascades Mountain range. The eruption caused widespread destruction, including the loss of 57 lives, the destruction of hundreds of square miles of land and $1.1 billion in damages.

A new coin from Fiji features an explosive topic of American origin.

The Proof .999 fine silver $10 coin with an antique finish memorializes the May 18, 1980, explosion of Mount St. Helens in southern Washington. Mount St. Helens is part of the Cascade Mountain Range and, after two months of earthquakes and steam-venting, the mountain exploded in a pyroclastic display on May 18.

The tragedy killed 57 people, wiped out thousands of acres of land, sent debris to 11 states and caused more than $1.1 billion in damages (not adjusted for inflation). Further, significant eruptions continued during 1980, with other episodes of periodic eruptive activity continuing until recent years.

The coin is part of the “Breath of Fire” series, the first issue from a program planned to include 10 coins. The second issue honors Kronotsky in Russia, but the subjects of the remainder of the issues in the series are unknown.

The Mount St. Helens coin features a locket containing 0.5 grams of golden obsidian, a volcanic glass, to represent the explosion (origins of the obsidian were not disclosed at press time). The reverse shows the mountain as it appears after the explosion, which removed much of the north face of the mountain.

The coin weighs 20 grams, measures 40 millimeters in diameter and has a mintage limit of 999 pieces.

The designer of the coin has not been disclosed publicly. European distributor Gavia is issuing the coin in the name of Fiji.

Each coin is individually numbered on its edge and each comes with a certificate of authenticity.

American Precious Metals Exchange offers the coins for $119.99 if payment is made via cash or check, or for $123.59 with credit card payment. Shipping and handling are additional.