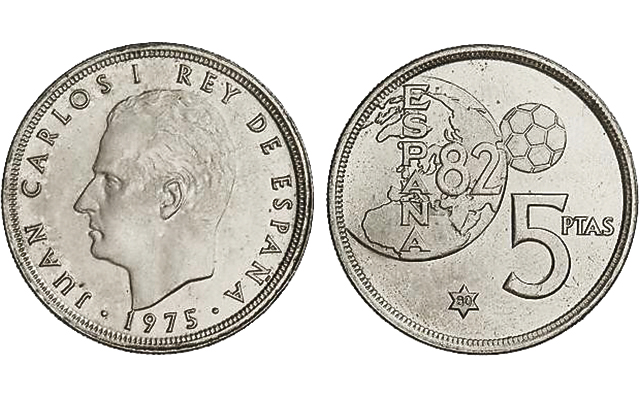 A “mule” error of Spain’s circulating 5-peseta coin for the 1982 FIFA World Cup, created with the wrong obverse die dated 1975, is in a July 10 auction in Barcelona.

In soccer, when you strike the ball incorrectly it can go out of bounds. When coins are struck incorrectly, errors result.

One such error, a 5-peseta coin with a soccer design on the reverse, was struck using the wrong obverse die and so is erroneously dated 1975. The coin highlights a July 10 auction in Barcelona, Spain. The auction is being jointly conducted by the firms Soler y Llach and Marti Hervera.

The eyes of the sporting world focused on Spain 32 years ago as the nation hosted the FIFA World Cup tournament, which Italy would eventually win.

Spain commemorated the 1982 tournament with a suite of collector coins, including a circulating copper-nickel 5-peseta coin struck for three years, 1980 to 1982, but with the same 1980 year date. The error coin was created when a 1975-dated obverse die for the standard circulating 5-peseta design was used for the commemorative coin rather than the intended 1980-dated commemorative obverse. Both dies carry the effigy of Juan Carlos I and legends indicating his name and role as king of Spain, with the date below the bust.

The nonerror coins are among the most common of modern circulating commemoratives from any nation, with cumulative mintage totaling 660 million pieces. But the error, known in the hobby as a “mule,” is far less known.

When two dies not intended to be paired together are used to strike coinage, the resulting error is called a "mule." The word plays off the animal that is the offspring of a male donkey and female horse.

The auction houses offer an Uncirculated example of the error.

In Uncirculated condition, the standard example of the coin has a catalog value of 25 cents, in the 2013 Standard Catalog of World Coins by Chester Krause and Clifford Mishler, edited by George Cuhaj and with values by Tom Michael.