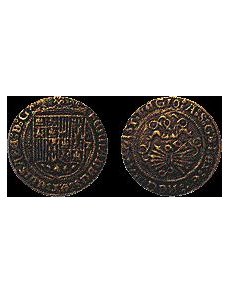 While digging through a lot of world coins, I discovered what appears to be a coin from Spain, or one of its territories, from approximately 1480.

I am not positive about this coin; however, it appears to be from the reign of Ferdinand I of Spain, the husband of Queen Isabella of Spain, who commissioned Christopher Columbus to sail to the Americas in 1492.

I wanted to check to see if this coin was worthy of historical interest to Coin World readers.

The find is worthy of historical interest, but only as far back as 1973, and more specifically, the U.S. Hobby Protection Act of 1973.

Judging from the photos submitted, chances are good that Mr. Bennett’s item is a modern-day cast piece, composed of cheap pot metal, that loosely represents a Spanish coin of the Ferdinand and Isabella era. Many of these were made as novelties to represent “pirate treasure.”

Mr. Bennett’s piece does not bear the legally required word COPY, so either it was manufactured prior to the 1973 act or produced later in violation of the act.

“The 1973 Hobby Protection Act, requiring that replica numismatic items bear the word COPY, passed after years of effort from hobby members and legislators intent on addressing the growing number of reproductions, copies, imitations and forgeries of coins in the late 1960s and early 1970s.

“The Hobby Protection Act regulates the production of numismatic replicas, including copies of such items as Colonial coins, pioneer gold coins and early paper money. The act requires manufacturers and importers of ‘imitation political items’ and ‘imitation numismatic items’ to mark such items ‘plainly and permanently’ with COPY.

“The purpose of the law was to curb the misrepresentation and fraud associated with the replica and counterfeit coins then rampant.