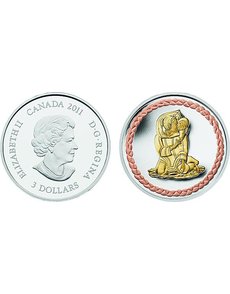 Three new Specimen coins from Canada feature native wildlife, such as the barn swallow, featured on an oversized 25-cent coin; a baby elk in a special set of Specimen coins; and an orca on a gold-plated silver $3 coin. 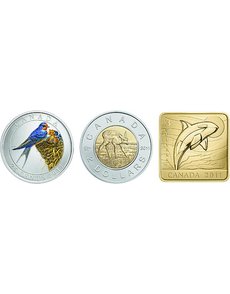 A new Family Scene silver $3 coin featuring selective gold plating, in both pink and gold hues, celebrates the native Inuit people, as a mother and child snuggle inside an amauti, an Inuit parka.

Fauna and family feature on four new coins from the Royal Canadian Mint.

On March 15, the RCM was scheduled to release a colorful, oversized 25-cent coin featuring the barn swallow, a Specimen $2 coin depicting a baby elk and a $3 coin showing the orca or killer whale. Another $3 coin bears a family scene, a native mother and her child.

The Barn Swallow 25-cent coin heralds the arrival of spring. It is the third coin since the return of the program one year ago.

Arnold Nogy’s design of a barn swallow, balanced on the edge of a nest, appears on the reverse of the 35-millimeter coin (Canada’s circulating 25-cent coin measures 23.88 millimeters).

The nickel-plated steel coin features color and is struck with a Specimen finish.

Specimen finish is described as a three-fold combination of brilliant and frosted relief on a lined finish background.

Susanna Blunt’s effigy of Queen Elizabeth II appears on the obverse, as it does on all the coins mentioned here.

As with earlier Specimen sets containing special coins, the special $2 coin replaces the standard circulating coin of the same denomination.

The Baby Elk $2 coin is in the standard specifications of the circulating denomination, with an outer ring of nickel and a core of copper, aluminum and nickel.

The coin weighs 7.3 grams and measures 28.03 millimeters in diameter.

Though it is found in both Atlantic and Pacific waters, the orca is particularly associated with the coast of British Columbia, according to the RCM, “where it is intimately tied to First Nation’s tradition, culture, heritage and mythology.”

In a Jason Bouwman design, an orca leaps out of the water, a stylized sun and waves in the background, on the reverse.

The specifications are the same as earlier issues (which honored the barn owl and polar bear in 2010), but the price is $3 more than the earlier issue price.

A black-footed ferret features on the final coin in the program, due for release later in 2011.

One of the coins in the latest launch also is rooted in First Nations’ people.

Designed by Inuit Andrew Qappik, the Family Scene $3 coin shows an Inuit mother and child in an amauti, an Inuit parka designed for women to keep their children warm in the harsh climes of the Arctic.

The coin, which is struck from .9999 fine silver, features selective pink- and gold-colored gold plating on the reverse, a pink gold braid surrounding the golden-hued family scene.