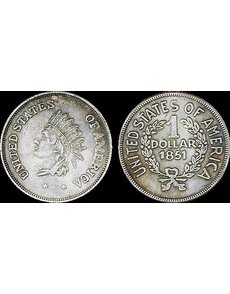 Fantasy piece found at a flea market in Argentina that has two different coin types used for the design.

A friend who knows I collect coins found this piece in a flea market in Argentina.

I looked it up in the “Red Book” but couldn’t find anything like it. It looks like a normal silver dollar, but it feels a bit lighter. What is it?

Your piece is not listed in A Guide Book of United States Coins (the “Red Book”) because it is not a product of the U.S. Mint.

The “coin” is a fantasy piece that is a pastiche of several designs used on regular issue United States coinage. It likely was not made to deceive coin collectors, but instead was designed to serve as a novelty item.

A fantasy piece is defined as an item that has similar basic elements of an authentic coin or similar item, but is an imaginary piece, not issued by the entity represented. It’s not considered a counterfeit in that it is not made to resemble a specific coin, although some can be deceptive. Collectors might consider such a piece to be a medal.

Different fantasy coins might be struck by private mints that also create coins approved by governments, but that isn’t likely the case with this coin.

It also should not be confused with a pattern coin, which is a piece produced to test a new design or composition or to serve as a model for a new denomination.

The obverse of this piece depicts an Indian bust, derived from the Indian Head cents designed by James B. Longacre and produced for circulation from 1859 to 1909. The design lacks the sharpness of an actual Indian Head cent. Note the incomplete bridge of Liberty’s nose and the dislocation of the lower feathers from the headdress. Also, rather than placing a date on the obverse, the medal’s creator placed two stars there.

The reverse of this silver-colored piece is dated 1851 but mimics the design of the small-sized Coronet gold dollar reverse — also designed by Longacre — and produced from 1849 to 1854.

All said, fantasy pieces are still sometimes sought after by coin collectors, and what this piece might lack in value, it certainly makes up for in novelty.