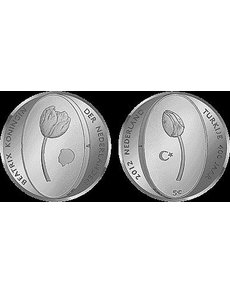 The Netherlands celebrates the 400th anniversary of diplomatic relations with Turkey on its first commemorative coin of 2012, a relationship to which the nation owes its symbolic tulips. Shown is the Proof .925 fine silver ?5 coin.

The tulip is perhaps the quintessential symbol of the Netherlands, but the Dutch actually owe the symbolic flower to the Turks.

This relationship between the Netherlands and what is now Turkey is featured on the first Dutch commemorative coins of 2012.

The subject of the ?5 and ?10 coins is the 400th anniversary of the establishment of diplomatic relations between the Netherlands and the Ottoman Empire (which became the Republic of Turkey in 1923), but tulip symbols dominate both sides of the commemorative coins.

The designs and topic are curious given the tension and outright violence (including the assassination of filmmaker Theo van Gogh in Amsterdam) in the past decade as Islamic culture collided with Dutch culture, but understandable given those cultures’ shared connection.

The explanation is simple: It was in the Ottoman Empire that the commercial cultivation of the tulip began, perhaps as early as A.D. 1000, and the flower was most likely introduced to Europe through diplomatic travels during the reign of Suleiman the Magnificent (1520 to 1566).

The tulip was planted at the University of Leiden’s Hortus Botanicus in the late 1590s, and 1594 is said to be the date of the tulip’s first flowering in the Netherlands. Although it was initially used for medicinal purposes, by the start of the 17th century the tulip found its place as a garden decoration and then as an article for trade.

As interest in the flower grew, bulbs began to sell for hysterical prices. Between 1634 and 1637 the enthusiasm for the new flowers triggered a speculative frenzy now known as “tulip mania.”

Just before the tulip market collapsed in February 1637, some single tulip bulbs were selling for more than 10 times the annual income of a skilled craftsman or more than the cost of a house.

The market for the bulbs is generally considered the first recorded speculative bubble, and “tulip bubble” has become a part of many languages.

The shared obverse design shows a small head of Queen Beatrix with a large open tulip.

On the shared reverse design is a large closed tulip seen in conjunction with a small star and crescent taken from the Turkish flag, said by the Dutch Mint to be a metaphorical representation of the native land of the tulip.

The designs were created by Deniz Seyda Tunca.

Several different coins of the same designs are being offered.

Uncirculated and Brilliant Uncirculated silver-plated copper ?5 coins are being offered, as are a Proof .925 fine silver ?5 coin and Proof .900 fine gold ?10 coin.

The copper-plated coins both weigh 10.5 grams and measure 29 millimeters in diameter. The Uncirculated example has a mintage limit of 250,000 pieces and the BU example is limited to 15,000 pieces.