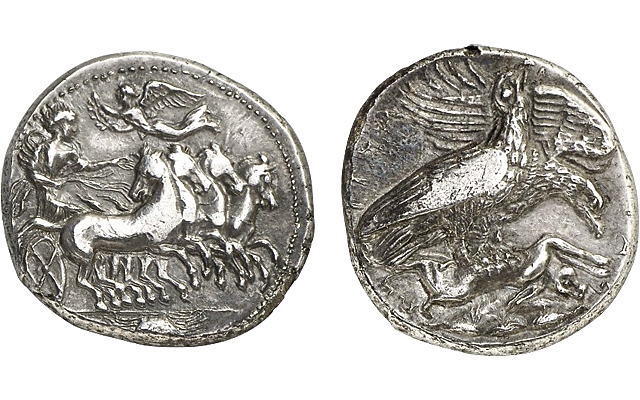 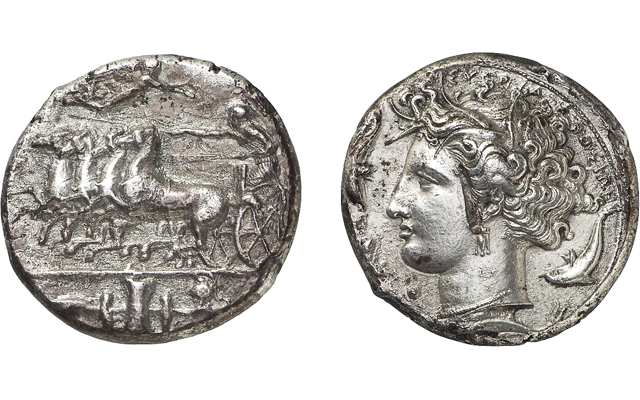 All results named are hammer prices and do not include the buyer’s fees or the value-added tax.

The coin shows a quadriga (or four-horse chariot) with its driver being crowned by a floating Nike (goddess of Victory) on the obverse, while two eagles gorge on a rabbit on the reverse.

This later style coinage, which replaced an earlier reverse design showing eagles and a crab, is among the “most impressive masterpieces of the classical Sicilian coinage,” according to the auction house.

After the city of Akragas was destroyed during a siege in 406 B.C., the coinage was recalled and exchanged, explaining why the late coin types of the city are rare today.

Akragas, perched on the Tyrrhenian Sea on the southern Sicilian coast, was one of the richest and most famous of the Greek colonies of Magna Graecia. Today it is known as Agrigento.

The city-state of Syracuse, in the seas off the coast off the Italian Peninsula, was another center of power issuing renowned coins.

Issued under Dionysius, the VF to EF coin shows a quadriga galloping left, Nike crowning the charioteer, on the obverse, with a reverse depicting the head of Arethusa surrounded by four dolphins. Arethusa, the water nymph, was an appropriate symbol for the island.

The coin is slightly toned, and has traces of corrosion and scratches, which could have kept it from realizing its full estimate.

Another imperfect coin from a Sicilian island, however, brought strong results.

The circa 460 B.C. silver tetradrachm of Naxos (an island in the Aegean), exhibited a VF to EF reverse but its obverse exhibited traces of corrosion and was graded VF.

According to the auction house, “In the previous years, it had been rather difficult to sell such imperfect coins regardless of their good provenance.”

This coin came from the John Ward Collection that was auctioned off in 1973.

The silver Greek coins were among thousands of offerings over three days.

Auction No. 219 was sold March 10, with auction No. 220 on March 11 featuring ancient coins and lots. The final auction, No. 221, sold on March 12 and focused on coins of medieval and modern times. A full list of prices realized can be viewed at the firm’s website, www.gmcoinart.de/online_katalog.