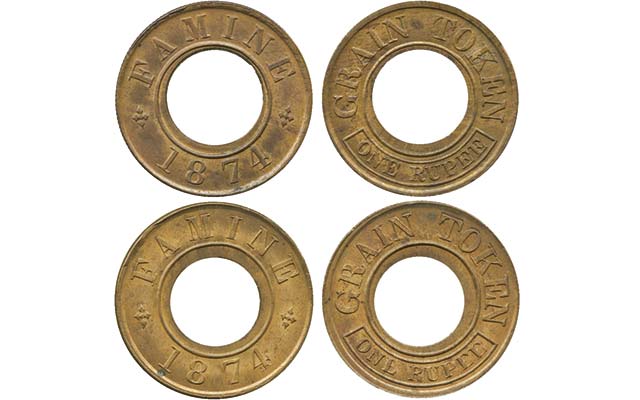 When a famine struck northern India in 1873 and 1874, the Calcutta Mint was called to issue tokens to be used in relief efforts. A pair of the tokens is offered in A.H. Baldwin & Sons Ltd.’s April 2 Hong Kong auction. 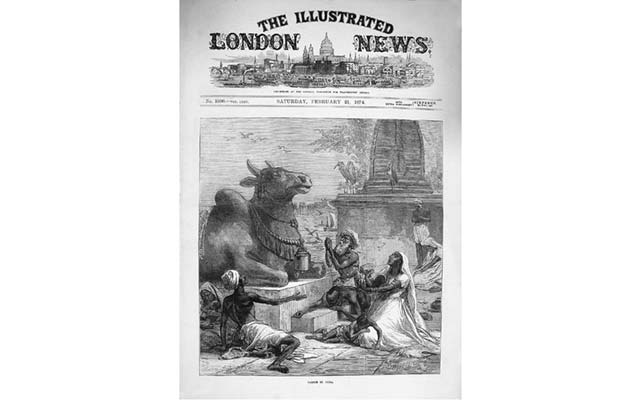 The famine in India became fodder for the London press, which spurred the crown to react quickly to bring food relief to the Indian subjects.

When famine and drought struck India in 1873 and 1874, the British government acted quickly to ensure that no casualties occurred.

As part of the so-called Bengal famine relief works, the Calcutta Mint created 1-rupee “grain” tokens. A pair of the tokens is offered in A.H. Baldwin & Sons Ltd.’s April 2 auction in Hong Kong.

The famine, also known as the Bihar famine of 1873 to 1874, was caused by drought. In response, rice was imported from Burma for distribution. The tokens were presumably used to monitor equitable distribution of rice to the needy.

Maj. Fred Pridmore wrote about the pieces, briefly, in The Coins of the British Commonwealth of Nations, Part 4, India (published in 1980).

Britain had dealt with India’s history of famines back to at least 1770, during the East India Company’s control of parts of the nation, according to The Imperial Gazetteer, Vol. III, the Indian Empire.

The Indian Rebellion of 1857 and 1858 ultimately saw the dissolution of the British East India Company and the transfer of power to the British raj.

The shift of power also spelled a change in famine relief administration.

“A new spirit entered into famine policy when the Government of India passed to the crown,” according to the Gazetteer.

The Bihar famine became fodder for the front pages of London’s news publications, like the Feb. 21, 1874, edition of Illustrated London News accompanying this article, with Indian subjects pleading before a statue depicting a cow, representing a goddess of plenty, for respite from the famine.

The crown acted quickly to assist the people of India, and leading the relief effort was Sir Richard Temple, newly appointed lieutenant-governor of Bengal.

The 1873 to 1874 famine relief efforts incorporated some of the lessons learned in earlier efforts under the British crown.

An estimated 21.5 million individuals were affected by the Bihar famine, with nearly two-thirds of the 67.5 million pounds sterling spent on providing 300 million daily servings of food (one per person, per day) in relief.

“Financial consideration were thrown to the winds, but lives were saved and a great advance was made in administration,” according to the Gazetteer.

How the tokens played a role is unclear in the literature, but their denomination and the system of rationing that was instituted suggests that they may have been provided by a relief agency to families, much as ration tokens were used in the United States during World War II.

The pair of tokens in the auction are each identified as Extremely Fine condition and together carry an estimate of $100 to $150 U.S.