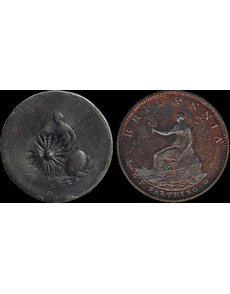 Friends and colleagues turn to home hobbyists to assess the value of family coins. This is one of my favorite pastimes. I recount the history and artistry of each item, usually stored in old cigar boxes or tin containers.

Mostly these “appraisals” are of common coins that might have been saved for their silver, such as a wartime Jefferson 5-cent coin, or used as a pocket piece because of the coin’s portrait, as is the Kennedy half dollar.

Often I find base-metal coins to mark a family trip. Those have sentimental rather than numismatic value.

Recently I heard the story behind a coin that fascinated me.

Michael Dahlstrom, an Iowa State University colleague, brought his family collection to my home for an appraisal. Apart from a few well-worn pieces of paper money, he had the typical collection of base-metal and silver coins.

One coin intrigued me. It was so worn that its devices were almost rubbed away.

At first I thought the portrait on the obverse was of George Washington. Then I realized it was King George the III, who waged war against Washington. I could barely decipher the date, 1799.

The coin had a shipwreck effect to it and also green residue from a soft plastic flip. The reverse had a countermark.

Dahlstrom said the coin marked a 1989 trip to Venice, Fla.

“I was 10 years old, and it was to be my first trip to the ocean. I remember being told that the ocean was so big that you couldn’t see across it, but I’ve always been proud of my sharp eyesight and I thought I might just be able to do it.”

Turns out he couldn’t. But the young Dahlstrom had fun anyway, spending days on the beach digging up shells.

“I was amazed that I could hear the waves of the ocean when I put the big shells up to my ears. I picked up a whelk (snail shell) and heard it rattle. I shook it and out slopped that black coin amongst slurries of sand.”

He said his family considered it “the best souvenir of our trip.”

With photos downloaded from the Internet, we were able to identify the coin as an English farthing (one fourth of a penny).

Afterward, Dahlstrom and I spent an hour trying to imagine the origins of the coin.

Did it belong to a British sailor who fought the United States in the War of 1812?

Was his man-of-war shipwrecked on the Sarasota shoals, his coin spiraling to the bottom of the deep only to land by its rim in the abandoned shell of a mollusk?

Our hobby always manages to enchant me! Do you have similar stories to share?