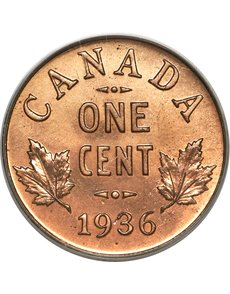 The legendary Pittman-Krause 1936 Canadian Dot Cent, the most famous coin in Canadian numismatics and one of just three known —and indeed one of the most famous coins in the world — is expected to bring more than $250,000 when it crosses the auction block as the feature lot in Heritage Auctions' April 18-23 CICF World & Ancient Coins Signature® Auction at the Crowne Plaza Hotel in Rosemont, IL.

This 1936 Dot Cent, graded MS63 Red by PCGS, is far and away the most famous of the three known Dot cents, having been stolen from the Pittman home in 1964 and later returned (with scratches in the right obverse field) in an envelope with other coins. It's being offered as part of the excellent Nikita Collection of Canadian Coins.

While the Dot Cent is the star of the auction, collectors will find international numismatic treasures from all over the world, and from across the epochs, to satisfy most every collecting taste.

An exceedingly rare Nicholas I platinum 12 Roubles 1835 C?? AU55 NGC (estimate: $80,000+) is one of the coins creating a significant amount of pre-auction buzz. The minting of platinum 12 Roubles began in 1830 and ended in 1845 when all platinum coins were recalled and melted.

The main anchor collection of the auction is the RLM Collection of Brazilian Gold, featuring 131 gold coins, including coins from Portuguese kings Pedro II and Joao V. The latter is represented by a stunning 1729 Joao V gold 12800 Reis, AU Details NGC, Second Shield Type, which should bring in excess of $60,000+.

"This is simply and outstanding Dobra from the Bahia Mint and an incredibly rare coin," said Cristiano Bierrenbach, Vice President of International Numismatics at Heritage.. "1729 is the rarest of the three dates of these coins and an extremely elusive issue overall. Heritage has only sold one of these before, and it was an uncertified example."

The Ancient coins section of the auction features an impressive array, including a superlative Chalcidian League Tetradrachm, circa 390 BC, from the short-lived defensive coalition of the free cities of the Chalcidice in ancient Greece, who banded together to ward off Athenian and Macedonian imperialism of the time. The coalition fell to Macedon on 348 BC and now, more than 2,360 years later, a coin from the time should bring more than $12,000 at auction.