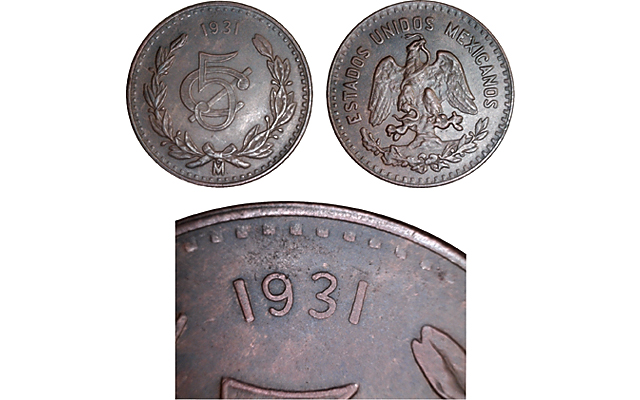 Counterfeiters have turned to faking copper coins of various countries, including this Mexican 1931-Mo 5-centavo coin. A genuine 1921 coin was used as the model, with the 2 altered to a 3 and transfer dies made of the altered coin.

The flood of counterfeit coins from China continues to expand.

The Standard Catalog of World Coins lists prices for this coin at $1,500 in Extremely Fine and $4,000 in Uncirculated, making it well worth the effort to counterfeit.

The downside to faking rare issues is that these pieces are given extra scrutiny when being bought and sold, and taking a close look at this counterfeit gives it away.

It appears that a genuine 1921 5-centavo coin was used as a model coin.

The 2 in the date on the genuine coin was altered to a 3, then counterfeit transfer dies were produced from the altered model coin.

When you look at the 3 in the date on the fake, the upper half of the 3 has a natural look, while the lower half appears to have been hand-cut, with a clumsy appearance.

Additionally, the design details are a bit fuzzy under magnification, whereas the edge of the coin is much too sharp for a circulation strike.

The fuzzy details are typical of a medium-quality transfer die counterfeit, as the transfer process tends to cause a loss of sharpness, but this diagnostic requires good lighting, a quality magnifier, and for most collectors, a genuine coin for comparison purposes.

The sharp edge results from the higher striking pressure, counterfeiters often use to counteract the loss of finer details.

ANACS authenticators have learned over the years that this type of fake rarely shows up in small numbers — the counterfeiters tend to strike hundreds, if not thousands, of pieces.

Collectors need to be on their guard with this date, as well as any other issue where the cost of a fake die and 20 cents worth of raw materials can be turned into a major money-maker.