Face to face, back to back, side by side 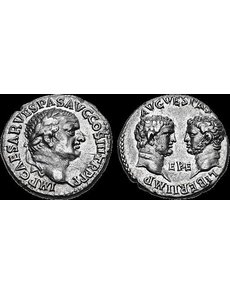 A silver denarius struck at the Ephesus Mint in A.D. 71 shows the Emperor Vespasian on the obverse and his sons, Titus and Domitian, confronted on the reverse. 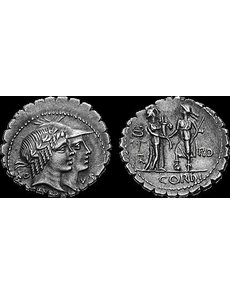 The divinities Honos and Virtus appear jugate on the obverse of a circa 68 B.C. silver denarius. The reverse shows Italia and Roma standing. 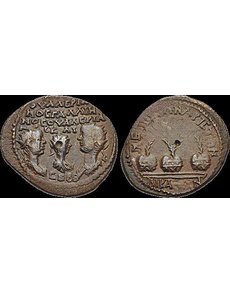 Valerian I, Gallienus and Valerian II are displayed on a Roman provincial bronze struck circa A.D. 256 at Nicaea in Bithynia. 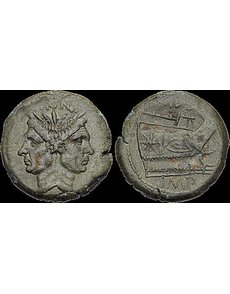 The features of the Roman warlord Pompey “the Great” are visible in the janiform portraits on some copper asses struck in Sicily after circa 45 B.C.

The ancient Romans are famous for many things, including the variety and quality of the portraits on their coinage.

Under the Roman Republic, coins were struck from the late fourth through the late first centuries B.C. Most portraits on Republican coins are of divinities, and it was not until the late Republic that portraits of living humans began to occur with any regularity. This became a standard practice under the Roman Empire, from 27 B.C. onward, and most Imperial coins bear the portrait of an emperor or a member of his family.

The usual format for Roman coin portraits is straightforward: a single head or bust shown in profile facing right or left; it was not until the A.D. 350s that it became increasingly normal to issue coins with a single portrait shown facing the viewer.

However, on some occasions more than one portrait is shown. Those coins often are ornate, and every one is historically significant. Except for unusual types that pair a person with a divinity, multiportrait coins usually were struck to promote political alliances or to celebrate members of the ruling dynasty.

We’ll examine various formats in which more than one portrait was displayed, and in the process will encounter some important coin types.

The most common way two portraits were shown on Roman coins was to have a single portrait on each side. Even so, this was a less common practice than one might expect. It was most extensively used during the reigns of the emperors Antoninus Pius (A.D. 138 to 161) and Marcus Aurelius (A.D. 161 to 180).

More interesting are those coins that feature more than one portrait on a side. Sometimes two portraits are shown face to face — a style usually called “confronted” or “vis-à-vis.” An interesting aspect of this format is that depending upon the facial expressions, it may look like a friendly encounter or a hostile standoff.

Though used only occasionally on Imperial coins, confronted portraits were used often on coins issued for use in the provinces. The style is best represented by provincial coins struck at cities in Eastern Europe and Asia Minor from about A.D. 200 to 260, all of which promote the dynasties that ruled the empire in that era.

The opposite of the vis-à-vis portrait is the dos-à-dos, in which the heads are arranged back to back, looking outward. This was seldom used, with the best-known examples being from Nemausus, in Gaul, which on their obverse portray Rome’s first emperor, Augustus (27 B.C. to A.D. 14), and his chief general, Marcus Agrippa. The reverse shows a crocodile chained to a palm branch.

A more usual presentation of back-to-back portraits shows the heads melded together to create a fanciful image of a single head with two faces. It is best associated with Janus, the Roman god of beginnings and endings — hence his simultaneously peering forward and backward. His name is preserved in “janiform,” the term used to describe this portrait style.

Janus is routinely portrayed this way, usually on copper asses of the Republic. Another common usage of this portrait style is for the Dioscuri (Castor and Pollux), who appear on silver quadrigati struck circa 225 to 212 B.C., during the Second Punic War.

The portrait of the Roman warlord Pompey “the Great” (died 48 B.C.) was cleverly incorporated into that of Janus on copper asses struck by one of his sons, Sextus Pompey, not long after the father’s execution. The Emperor Commodus (A.D. 177 to 192) was fond of using this portrait style for himself on medallions, often pairing his own features with those of a deity.

Another way of showing two portraits was to have them face in the same direction, slightly overlapping. Usually called “jugate,” this format is appealing since the dies must be engraved in reasonably high relief to achieve the desired effect. It was used on several occasions during Republican times, when gods were shown, and during the empire, when at least one of the portraits usually was a person.

One famous example of this type was struck by the Emperor Nero (A.D. 54 to 68) early in his reign; he is portrayed alongside his mother, Agrippina Jr., who he eventually had murdered. The jugate format became popular for ceremonial issues of the third century A.D., being used by the members of dynasties founded by Carus (A.D. 282 to 283) and Diocletian (A.D. 284 to 305), and by rulers of Roman separatist empires in Gaul and Britain.

Some jugate coinages even show three portraits. A bronze struck at Ephesus, Ionia, after circa 44 B.C., depicts Marc Antony, Octavian and Lepidus, the members of the Second Triumvirate. Equally historical is a billon double-denarius of Carausius, who in A.D. 286 or 287 founded a rebel empire based in Britain; this remarkable type coin portrays Carausius and his enemies, the Roman emperors Diocletian and Maximian. One can only guess whether he was trying to curry favor with the emperors, or if he was trying (disingenuously) to make his own subjects believe the three men were on good terms.

Finally, some compositions were irregular. A silver denarius of the Emperor Augustus, struck in 13 B.C., bears on one side the portraits of his daughter, Julia, and her sons, Gaius and Lucius, all three of which are shown in profile, lined up on the reverse. Since Julia was Augustus’ only child, and her sons were being groomed as heirs, it clearly was a dynastic issue.

Two other dynastic coinages are also of interest. One is a gold aureus of Septimius Severus (A.D. 193 to 211) that shows on its reverse the portraits of his wife and two sons; her portrait is full-facing and those of her sons face inward from her left and right. The other is a provincial bronze of Nicaea, Bithynia, which shows the father-and-son emperors Valerian I and Gallienus, with the son of Gallienus, Valerian II; this time two of the portraits face right, and one faces left. ¦