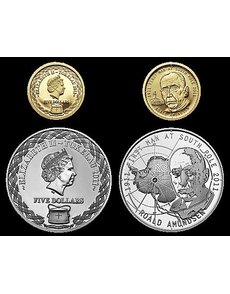 The story of the conquest of the poles — an enthralling footrace about fame and honor, life and death — features a list of famous explorer, but one especially stands out: Norway’s Roald Amundsen, who is the subject of new noncirculating legal tender coins from Tokelau.

The Proof .925 fine silver $5 coin and Proof .9999 fine gold $5 coin together honor the 100th anniversary of Amundsen’s conquest of the South Pole, which is denoted on the silver $5 coin with a real Swarovski crystal embedded at its position.

Even as a small boy it was Amundsen’s dream to be the first person to stand at the North Pole.

In fall 1909, while preparing to realize this dream, he learned that on April 6 the American Robert E. Peary had reported that he had already reached the North Pole (a claim not universally accepted), so Amundsen changed his goals and set out for the Antarctic two years later. There, he engaged in a dramatic race with Robert F. Scott of England: a journey of 937 miles that took two months at -22 degrees Fahrenheit. Thanks to better equipment and strategy, on Dec. 14, 1911, he and his team became the first to stand at the South Pole.

When Scott arrived 35 days later, the Norwegian flag was flying there to greet him. Scott’s return voyage was a tragic disaster — he and his four companions lost their lives — starved, exhausted and frozen to death, while Amundsen returned home in triumph and became the first national hero in young Norway.

The Coin & Currency Institute is offering the coins, which were released by Coin Invest Trust.