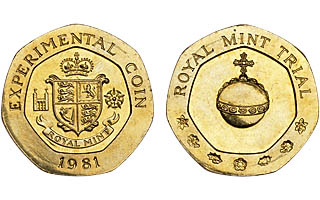 A 1981 trial 25-pence coin in nickel-brass is apparently unique. Dix Noonan Webb offers the rarity in a London auction April 2 and 3.

When the United Kingdom was considering adding a decimal coin denomination in 1981, samples, or trials, of a seven-sided 25-pence coin were produced by the Royal Mint. The coin was needed to fill the gap between the 10- and 50-pence denominations.

An example of the trial piece is offered in Dix Noonan Webb's April 2 and 3 auction in London.

Treasury opted to add, instead, a seven-sided 20-pence coin, and the 25-pence trial pieces were consigned to the dustbin of history. Though copper-nickel examples are known, Dix Noonan Webb reports that no specimens have previously been recorded in nickel-brass.