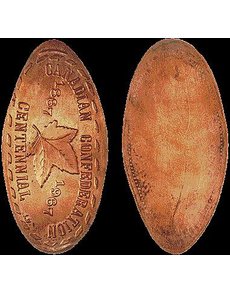 This 1867-1967 Centennial souvenir elongate was rolled on a 1967 Canadian commemorative cent. Currently, it is illegal to alter Canadian coins. 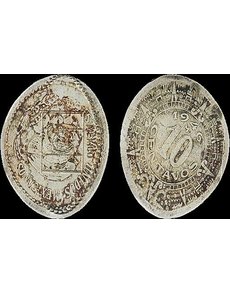 The word “Mexico” and the Mexican flag with the eagle and snake center have been rolled onto this 1946 10-centavo coin right over the Eagle and Snake design, making it an eagle on eagle design. 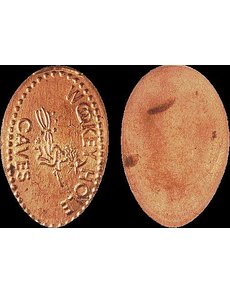 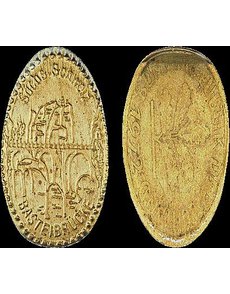 This 1972 West German 5-pfennig coin is a souvenir from the Sachs Schweiz Basteibrucke rock formation tourist attraction. The Mint mark is obscured by the rolled design. 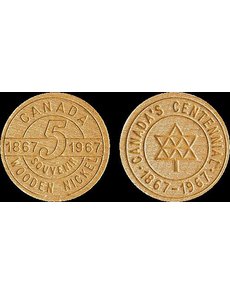 This type of varnished Canadian wooden nickel is referred to as a broomstick. Its 6-millimeter double-thickness is reminiscent of a piedfort coin. The wood has the centennial dates of 1867 and 1967. 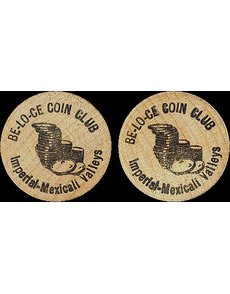 Having the same design on both sides, this wooden nickel advertisement for the Be Lo Ce Coin Club that straddled the border of Mexico and California could be declared a 5-cent piece or 5-centavo piece, as needed. 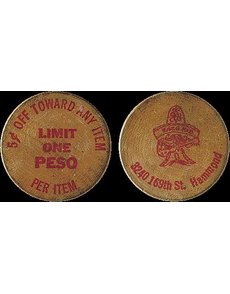 Wooden token coin originated from a Mexican restaurant in Indiana. This dual-denomination wooden nickel has both peso and 5-cent values. 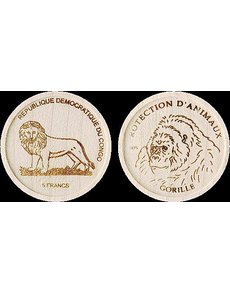 Elongated coins and wooden nickels are two forms of exonumia with American origins that have traveled beyond U.S. borders.

Two types for the world collector to enjoy include pieces made in the United States with the coins and denominations of other nations, and those made in other countries primarily for local consumption.
Unlike wooden money, elongates begin life as legal tender. They are not re-engraved by hand like love tokens and hobo nickels but are machine-rolled into ovals with new designs.

The technology was born at the World’s Columbian Exposition in Chicago in 1892 and 1893. Cents are most commonly used but other denominations are sometimes found. “Penny smashing” machines can be found the world over, creating instant souvenirs for people visiting zoos, museums, and amusement parks.
In Canada, altering coins is against the law. This has discouraged but not eliminated the production of elongates. A relatively easy to find type is the one-year 1967 Confederation of Canada Centennial cent, rolled with various designs as part of the 100-year celebration of that nation. The iconic maple leaf is a popular rolling design on these 1967 cents.

Altering coins became illegal in Great Britain after 1936 but was made legal again after 1981. Because of the most recent shift in policy, elongates and the machines that make them are becoming more commonplace.

One 2000 copper-plated steel penny elongate hails from the famous Wookey Hole Caves tourist attraction in Somerset, England. Legend claims the 50,000-year-old limestone cave is inhabited by a witch and a ghost.

Some tourist attractions in Germany make rolling machines available to tourists who want to make their own souvenirs.

One 5-pfennig example attempts to recreate a little of the majesty of the beautiful Schweiz Basteibrucke rock formation. The date on this 1972 West German coin remains visible but the Mint mark is totally obscured.

Elongate collectors like those who belong to The Elongated Collectors (tecnews.org) prefer to have the date preserved when possible because it is part of the story the elongate tells.

Venturing into the woods

Some wooden “coins” are actually tokens imbued with various temporary local values by the towns, merchants or private individuals who issue them. During the Great Depression, a few banks issued them to help with coin shortages. Towns in Washington state named Tenino and Blaine are credited with creating the first wooden token coins for local usage in 1931 and 1933.

Today, municipalities across North America and Europe issue wooden nickels for celebrations as “good-fors,” and many coin clubs, businesses, and politicians offer them as advertising.

Wooden “coins” proliferated across America in 1976 as part of the Bicentennial celebration.

Nine years earlier, a similar situation unfolded in Canada as part of that nation’s Centennial. Among these issues were varieties of blond wood “broomsticks,” thick piedfort-like varnished wooden nickels that look like they could have been lopped off the end of a broomstick. The pieces measure 25 millimeters in diameter and have incuse designs.

The Canadian Association of Wooden Money Collectors at www.nunet.ca/cawmc.htm says that more than 5,500 different Canadian “woods” are known. Newer types are hot press stamped or silk screened rather than printed.

An undated example from the now defunct Be Lo Ce Coin Club provides an excellent example of a coin club wooden nickel.

This club was located in the Imperial-Mexicali Valleys, straddling the borders of Mexico and the United States. With a drawing of coins instead of a stated denomination, it could be a 5-cent piece or a 5-centavo piece, as needed.

One example of a restaurant wood with dual denomination was made in Indiana as advertising for a Mexican restaurant that went out of business more than two decades ago. What might catch the attention of some Mexican coin collectors is that this token equated the value of a peso with a U.S. 5-cent coin. Just prior to the introduction of the nuevo peso in 1993, it actually required 600 pesos to equal a U.S. 5-cent coin.

In 2005, world wooden money collectors celebrated a unique event. The Republic of the Congo issued a legal tender wooden coin, a 5-franc piece with the nation’s symbolic lion on one side and a conservation message about gorillas on the other.

This issue brought lots of positive attention to the hobby. Made of maple in the standard 38-millimeter-diameter wooden nickel size, the total mintage for the wooden coin is 2,000 pieces. ¦