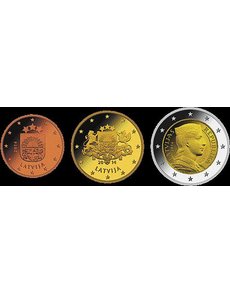 Like many euro nations, Latvia is issuing a tiered system of three designs, with one design used for the three smallest denominations, another for the three higher-denomination euro-cent coins and a third design on the ?1 and ?2 coins.

Images courtesy of the Latvijas Bank. 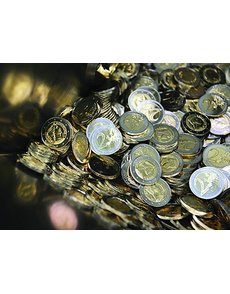 Images courtesy of the Latvijas Bank.

The eurozone, the group of nations using the euro currency, is expanding.

Striking of new euro coins for Latvia began in Germany July 31, five months before the coins are to begin circulating on Jan. 1, 2014.

Adoption of the euro will take place 10 years after Latvia joined the EU amid the largest expansion of the body.

A total of 400 million euro coins with Latvian national designs are being struck at the State Mints of Baden-Wuerttemberg, in Stuttgart and Karlsruhe, to prepare Latvia for the transition.

Sample sets of euro coins with Latvian designs will be released Dec. 10 through commercial banks, branches of the Latvian Postal Service and the cash windows of the Bank of Latvia in three cities, to allow residents of Latvia to become familiar with the coins.

The eight denominations will feature three designs as chosen in a national contest in 2004 (winners were announced in 2006).

National designs appear on the obverse, with different maps of the EU on the reverse.

The 1-, 2- and 5-cent coins feature the “small coat of arms,” which is part of Latvia’s coat of arms. The design shows a shield with a rising sun above a dragon and lion rampant. Three stars appear immediately above the coat of arms. A circle of 12 stars surrounds the central devices.

The “great coat of arms” of Latvia, the full version, adorns the 10-, 20- and 50-cent coins. It includes the shield, flanked on opposite sides by a lion and dragon, with leaves and a ribbon below.

A folk maiden depicted on the ?1 and ?2 coins is a symbol of both traditional virtue and Latvian money; this same portrait adorned the reverse of the silver 5-lats coin in the 1920s for the newly independent Latvian state.

No special bank notes are needed; Latvia will use bank notes from other eurozone countries.

For two weeks, both the traditional lats and euro currencies will circulate before the lats will no longer be accepted for transactions. Lats will retain legal tender status at the Bank of Latvia indefinitely and may be exchanged for limited periods through other outlets.