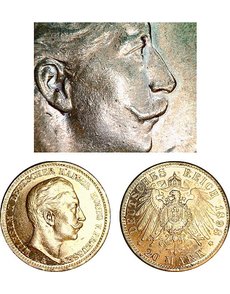 On this fake 1898-A German 20-mark coin, a small patch of raised tool marks appears on his jaw, just to the right of his ear lobe.

As the price of gold continues its upward march, we are seeing more counterfeit gold coins in the ANACS grading room. Many of these fakes are common-date pieces that are worth less than $50 over their bullion value, while others are slightly better dates or varieties.

As you might expect, most of the fake gold coins we are seeing are counterfeits of United States issues.

However, we are encountering an increasing number of counterfeits of European gold coins, including pieces mimicking coins from Great Britain, France, Germany and Italy.

Coins that contain approximately one-quarter of an ounce of gold seem to be the most popular targets for the counterfeiters.

The counterfeit Germany-Prussia 1898-A gold 20-mark coin shown here is a good example of this trend. A genuine 20-mark piece contains a little less than a quarter ounce of gold, and typically trades for a small premium above its gold content. This fake has the same weight and gold content as a genuine example, so it cannot be detected with a scale.

On the plus side, because of the fake’s gold content, a collector who ends up with one of these pieces will not suffer a total loss, as is the case with fake 1916-D Winged Liberty Head dimes or 1909-S Lincoln, v.d.b. cents.

While the color of the gold and the sharpness of the details on this counterfeit are reasonably close to a genuine coin, a few diagnostic defects on the face of Wilhelm II make detection easy. A small patch of raised tool marks appears on his jaw, just to the right of his ear lobe.

Tool marks occur on a counterfeit coin when the fake die is scratched or scraped with a sharp tool, usually to smooth out a defect on the die. An incuse scratch on the die will translate to a raised line on the fake coin, and small patches of tool marks are normally a strong indication that the coin is counterfeit.

The counterfeit also has a few raised “pimples” of metal on Wilhelm’s jaw and chin. By themselves, small raised lumps do not condemn a coin, since they also occur on genuine coins. However, when combined with patches of tool marks, these pimples are additional evidence that the coin is not genuine.

German gold coins from the 1890s typically exhibit superior craftsmanship, so the defects described in the column should immediately raise red flags about the coin’s authenticity.