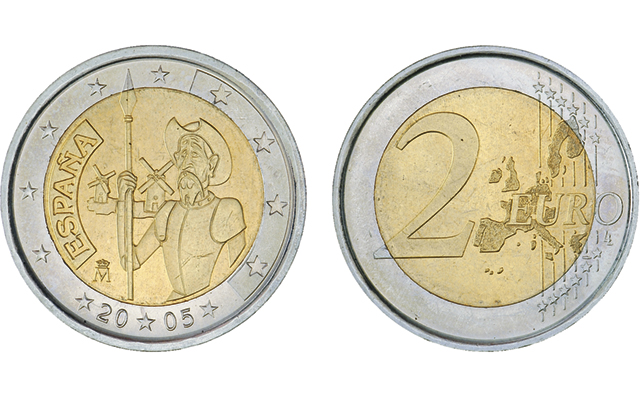 The fictional literary figure Don Quixote, known for “tilting at windmills,” is from a 17th century book by Spain’s favorite son, Miguel de Cervantes. Spain honored both the author and his creation with this €2 coin in 2005. 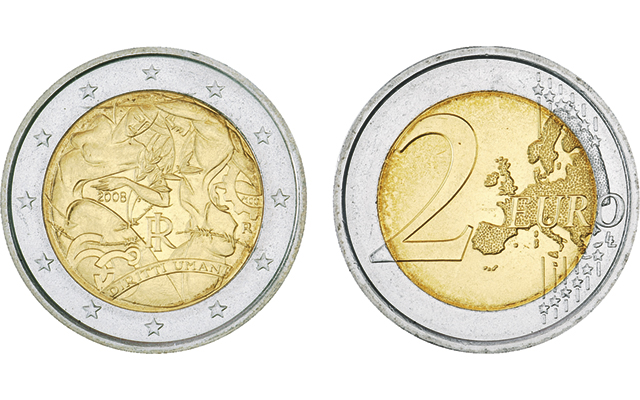 The complex design of this 2008 Italian €2 coin depicts a man and a woman with an olive branch, an ear of corn, a cogwheel, and some broken barbed wire, symbols of the right to peace, food, work, and freedom, respectively. 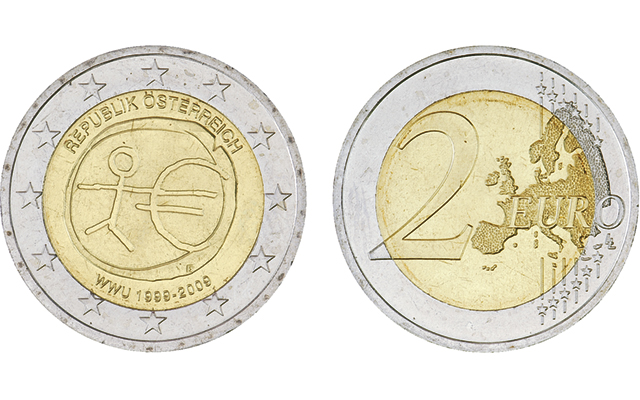 All eurozone nations commemorated the same topic with €2 coins in three years. In 2009, the joint theme was the 10th anniversary of the Economic and Monetary Union. The abstract design was selected in an electronic vote by EU citizens. Austria’s coin for the theme is seen here. 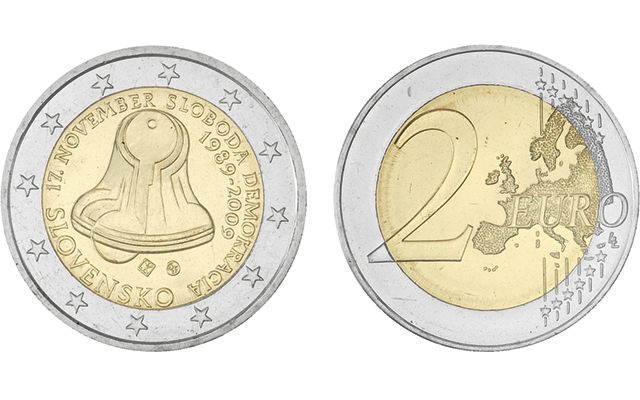 The 2009 Slovakian coin offers a modern-day interpretation of an icon of liberty. The €2 coin shows a bell with keys serving as clappers, recalling the 1989 event when protesters jangled their keys to symbolize the unlocking of doors. Communism fell soon after. 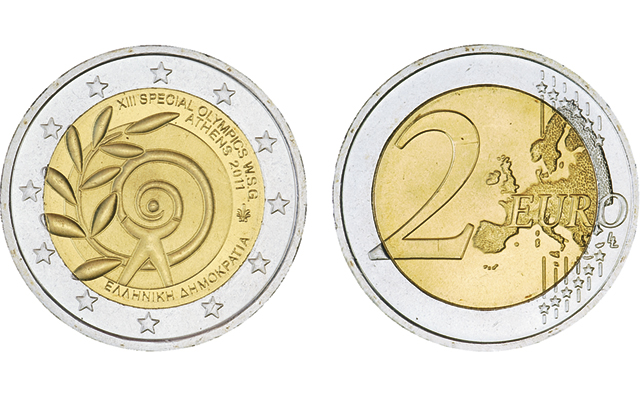 Sixteen years after the United States minted a Special Olympics commemorative in 1995, Greece did, too. The 2011 €2 coin includes the sun, olive branch and spiral, all symbols of the Games. 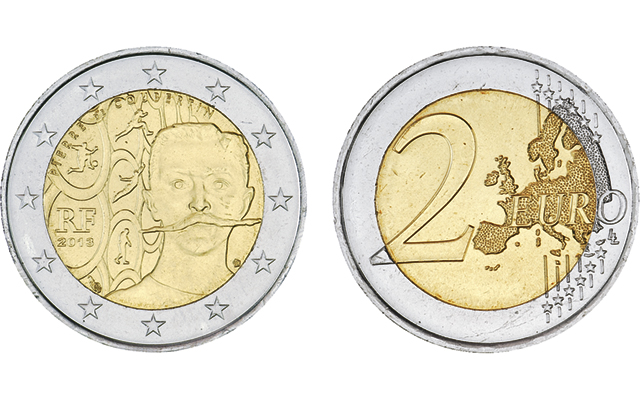 This 2013 French €2 coin celebrates the 150th anniversary of the birth of Pierre de Coubertin, initiator of the revival of the Olympic Games and first president of the International Olympic Committee. 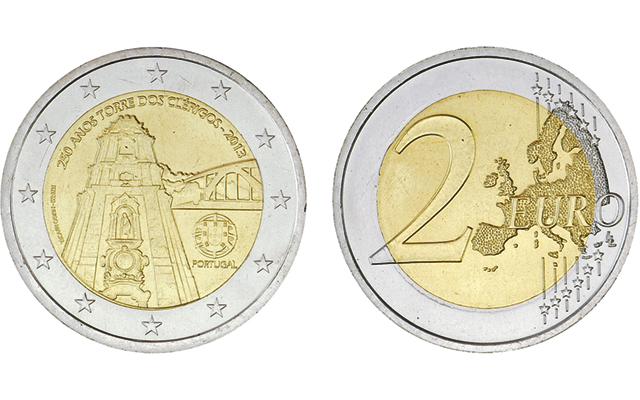 The perspective of this design is that of a visitor looking up the side of the six-story Tower of the Clergy. The building is now 250 years old and remains a symbol of the city of Porto, Portugal. 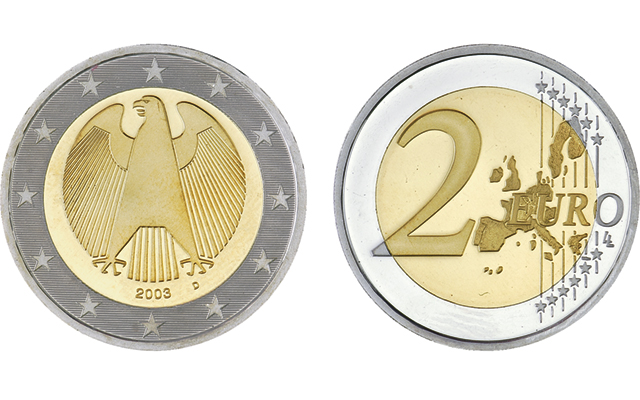 Due to a higher mintage, Germany’s Proof €2 coin of 2003 showing a stylized eagle is more affordable than Proof €2 coins issued that same year from other euro nations.

Classical nudes, stylized symbols, abstract art, unique perspectives, stories from literature and history, and more can all be found on Europe’s little ringed-bimetallic commemorative, the €2 coin.

Each of the 18 nations in the Eurozone is allowed to issue two of these annually (not counting joint issues across the eurozone), though the limit was one per year until 2012. About the size of a U.S. Washington quarter dollar, one might think the size and the twin-metal makeup of nickel-brass and copper-nickel would be impediments to design. However, the €2 coin is proving to be an excellent commemorative vehicle with designs ranging from simple to innovative.

Germany’s first €2 coin was issued in 2002 and the design, a stylized eagle, has been repeated every year since. The edge inscription is Germany’s national motto, translating to “Unity and Justice and Freedom.” The coin is particularly beautiful in Proof because of the contrast in the gold and silver colors of the polished metals.

The national symbol is stylized but recognizable, and patriotic. The Proof 2003 version of the €2 coin is more affordable than the Proof 2003 €2 coins from other euro-issuing nations due to its relatively high mintage of 60,000 pieces. By comparison, Luxembourg and Spain minted, respectively, only 1,500 and 8,904 Proof versions that year of the €2 coin.

In 2005, Spain honored one of its favorite sons, Miguel de Cervantes, by illustrating its €2 coin with the literary character Don Quixote. In one scene in the famous 17th century novel, Quixote mistakes a field of windmills for giants and decides to attack them. Some believe the story is a warning to nations to be more careful about taking steps that result in violence. The coin features a comical cartoon-like Quixote with his spear in the foreground and windmills in the background.

Along with Belgium, Portugal and Finland, Italy chose to use 2008 to commemorate the 60th anniversary of the United Nations’ Declaration of Human Rights with a €2 coin. With its symbolism and flowing nudes, its design is reminiscent of the classical designs of Italy’s early 20th century coinage. The design shows a man and a woman with an olive branch, an ear of corn, a cogwheel, and some broken barbed wire; these are symbols of the right to peace, food, work, and freedom, respectively.

At the bottom of the image are open chain links forming the number 60, along with the inscription DIRITTI UMANI (translating to “human rights”). The fact that all of this fits into the inner ring of a 25-millimeter diameter coin is amazing.

The theme of 2009 was the 10th anniversary of the Economic and Monetary Union. The design was selected through electronic voting by EU citizens, beating four other design options. The winner is an abstract art stick-figure interpretation of the unity of the Eurozone nations that appears at first glance to be an ancient cave drawing, or a young child’s art project.

Also in 2009, Slovakia issued a €2 piece that tells an interesting story. The design is a bell that has keys for clappers. This modern-day liberty bell commemorates the 20th anniversary of the “Day of the Fight for Freedom and Democracy,” Nov. 17, 1989. On that date protesters demonstrating for democracy jangled their keys to symbolize the unlocking of doors. This event began the nonviolent “Gentle Revolution” in Czechoslovakia, which ended one-party Communist rule and, in 1993, resulted in the creation of Slovakia.

The 2 coin has been used to commemorate sporting events like the Olympics. Sixteen years after the United States minted a 1995 Special Olympics commemorative coin, Greece did, too, with a €2 piece in 2011. The inner circle shows the emblem of the Games, the sun, as the source of life. Excellence is represented by the olive branch and power by the spiral starting from the sun. Around the center design is the inscription XIII SPECIAL OLYMPICS W.S.G. ATHENS 2011, as well as a legend in Greek.

In 2013, France issued a €2 coin that commemorates sports indirectly. The mustachioed man on the obverse is Pierre de Coubertin, who initiated the revival of the modern Olympics and served as the first president of the International Olympic Committee.

The coin honors the 150th anniversary of his birth. Olympic rings can be seen in the background. The name Pierre de Coubertin arcs above the top left of the central design, just within the ring.

Also in 2013, Portugal employed a creative design with a unique perspective to commemorate the 250th anniversary of the historic church tower that serves as the symbol of the city of Porto.

The perspective is that of a visitor looking up the front side of the 75-meter-tall Tower of the Clergy. Designed by the Italian painter and architect Nicolau Nasoni, the tower is the highest in Portugal, with six floors and 225 steps. Its construction began in 1754 and was completed in 1763.