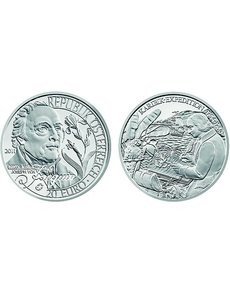 Austria’s entry in the European Silver Program honors explorer Nicholas von Jacquin, whose travels in the name of the crown of the Habsburgs took him to the Caribbean and elsewhere. 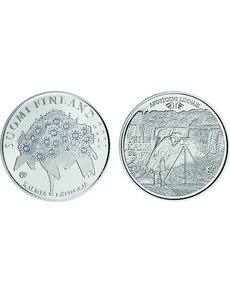 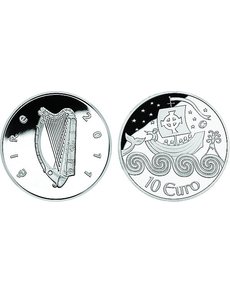 Mints in eight nations are coordinating for a program of collector coins honoring European explorers in 2011.

The European Silver Program, formerly the Europa Star Program, is a cooperation between several member mints of the European Union, which have agreed to issue coins celebrating common aspects of European identity.

All of the coins in the program carry the eurostar symbol, a star surrounded by an “E” to represent the European Union.

Most nations have already issued their coin from the program, with those from Italy and Portugal not yet issued.

To participate, the issuers must be members of the European Union, and the explorer honored on a participating country’s coin must have been a European or conducted their exploration on behalf of a European nation.

Each of the coins is available from the regular retail outlets for each of the respective participating Mints.

Austria honors botanist Nicholas von Jacquin on its entry in the program, Finland celebrates natural scientist Pehr Kalm and another coin, from Ireland, depicts St. Brendan the Navigator. The French coins honor Jacques Cartier (see May 13 issue of Coin World). Coverage of other coins in the program will appear in future issues.

The obverse of the coin, which was designed by Austrian Mint engraver Helmut Andexlinger, shows a three-quarter portrait of von Jacquin, along with a detailed depiction of the plant Iris variegata, one of his many discoveries, to the right. The obverse also carries his name, the eurostar, the name of the country of issue, the face value and the year of issue.

The reverse shows von Jacquin on a tropical island in the Caribbean. Large banana leaves and a parrot are seen on the left side of the design. A tall-masted sailing ship can be seen at anchor in the background. Von Jacquin is seen writing notes about some of the many plant species he identified, some of which no longer exist today. Chief mint engraver Thomas Pesendorfer designed the reverse.

Nicholas von Jacquin was born in Leiden, in the Netherlands in 1727. He became the imperial botanist of the Habsburg Empire under Emperor Franz Joseph I of Austria. Von Jacquin accompanied one of the earliest overseas expeditions of the Imperial Navy from 1755 to 1759, on a trip to the Caribbean, the Antilles, Venezuela and Columbia, bringing back animals and plants for the zoo and botanic gardens at the Imperial palace of Schönbrunn.

The Mint of Finland’s entry in the program, a .925 fine silver €10 coin, honors a scientist who made history in the United States.

Finnish natural scientist Pehr Kalm, one of the “apostles” of Carl Linnaeus (the 18th century scientist who devised the modern taxonomic naming system for plants and animals), explored North America and was the first in the world to write a scientific account of the Niagara Falls, according to representatives of the Mint of Finland.

Kalm brought back from the New World hundreds of new plant species, and the state flower of Pennsylvania and Connecticut, Kalmia latifolia, is named after him.

Kalm also discovered hundreds of new varieties of plant life on his pioneering journey to America, as symbolized by the mountain laurel found on the obverse of the coin.

The reverse shows Kalm, with Niagara Falls in the background, below a legend translating to “apostle of Linnaeus.” The denomination, his name and birth and death years, as well as the eurostar, also appear on the reverse.

The coin, which was designed by Erkki Vainio, weighs 17 grams and measures 33 millimeters in diameter. Its mintage limit is 6,000 Brilliant Uncirculated pieces and 14,000 examples in Proof.

Ireland’s issue in the series also has a link to North America.

The Central Bank of Ireland commemorates Saint Brendan the Navigator on a Proof .925 fine silver €10 coin.

The obverse carries the Irish harp design, the date and the nation’s name.

The reverse depicts Saint Brendan and his monks sailing towards the Americas in his legendary voyage across the Atlantic in the 6th century.

Designed by Michael Guilfoyle, the coin is illustrated with iconography associated with Saint Brendan’s epic journey and shows him sailing across the rolling waves of the Atlantic in a stylized, interwoven pattern.

A legendary tale suggests that Saint Brendan and up to 60 pilgrims set sail, in search of Paradise, on a curragh, a wood-framed boat covered in ox-hides. In the legend, Saint Brendan and crew stopped at a small island to give Easter Mass, starting a fire only to learn that the island was a sea creature.

The Austrian coin is available for $67 from Euro Collections International, which also offers the Proof version of the Finnish coin for $65.

Distributor Royal Scandinavian Mint offers both BU and Proof versions of the Finnish coin, for $54.95 and $64.95, respectively, as well as the Irish coin for $69.95.