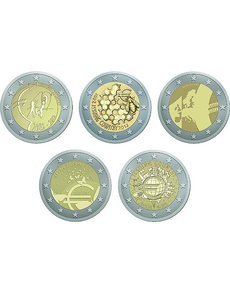 Voting to select a joint circulating commemorative €2 coin to mark the 10th anniversary of the common currency of more than 330 million people began June 6.

Voting continues through June 24, and the winning design from the five finalists will be announced June 30.

Coins bearing the winning design (differing only by the issuing name of each country) will enter circulation in January to mark 10 years since euro notes and coins first came into circulation.

Citizens and residents of the 17 member states of the eurozone (the area issuing the unified currency) may cast votes using a special website hosted by the European Commission, www.eurocoincompetition.eu/home.

Voters can choose from five designs, many of which incorporate similar themes. The dual dates 2002 and 2012 appear on each design,with the finalists bearing a place for the issuing countries’ names.

? One design shows the euro currency symbol over a globe, with symbols surrounding the globe including wind turbines, a factory, several people holding hands, houses and a sailing vessel.

? Another design shows 27 butterflies (in whole or in part), perhaps representing the 27 members of the European Union, the governing body that formed the basis for the joint currency (not all EU members use euros, though most will eventually have to adopt the currency). The euro symbol also appears on the design.

? A third design shows a map overlaid by the numeral 10, which also help to form the euro symbol.

? The euro symbol morphs into an arrow on a fourth design, which also shows two people holding hands and the stylized digits of 10 in the background.

? A fifth design shows the euro symbol with a bee and honeycomb, with 17 holes in the comb filled, perhaps representing the 17 eurozone members.

All eurozone members are allowed (but not required) to issue one special circulating commemorative €2 coin annually. Special joint issues like the one planned for the 2012 celebration (and previous joint issues in 2007 and 2009) do not count toward the limit.

The €2 coins are ringed-bimetallic pieces, with a nickel-brass-plated nickel center and a copper-nickel ring. All €2 coins share a standard design on the common, reverse, side. On the national side, or obverse, of each regular €2 coin, the 12 stars of the European Union flag appear on the outer ring, with the commemorative design dominating the center piece. ¦