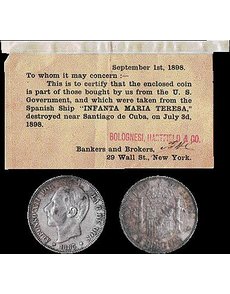 An envelope touts the 1883 Spanish 2-peseta Alfonso XII coin shown as being from a Spanish ship damaged during the Spanish-American War.

About 10 years ago I purchased an envelope that contained an 1883 Spanish 2-peseta Alfonso XII coin. The envelope is dated Sept. 1, 1898, and has a message indicating that the coin was acquired from a Spanish ship in 1898.

The envelope itself measures 5½ inches by 3¼ inches.

I am curious if there is any additional information you can provide about this artifact from the Spanish American War.

The combination of the coin and the envelope makes for an interesting souvenir with a story related to the Spanish-American War.

The ship the Infanta Maria Teresa was damaged after drawing American fire in the battle with the American squadron, which was led by Commodore George Dewey. Teresa then ran aground after it attempted to hit the USS Brooklyn.

The envelope reads: “To whom it may concern:— This is to certify that the enclosed coin is part of those bought by us from the U.S. Government, and which were taken from the Spanish Ship ‘INFANTA MARIA TERESA’ destroyed near Santiago de Cuba on July 3d, 1898.”

A handstamp of “Bolognesi, Hartfield & Co.” in red ink appears above the text “Bankers and Brokers, 29 Wall St., New York.” Handwritten initials for the firm are written nearby reading “BHC.”

A photo shown in the The Granger Collection, found at www.granger.com, shows the firm of Bolognesi, Hartfield and Co. and has a caption stating that this New York company was also a steamship agent for the Italian Line.

Similar items with different coins and envelopes with slightly different dimensions were found in two different auctions. One was a Spanish 1881 gold 25-peseta coin of Alfonso XII that sold for $126.50 in an October 2000 Heritage Auction. Another, a Spanish 1866 40-centimo coin, sold for $80.50 in a Stack’s auction in January 2004.