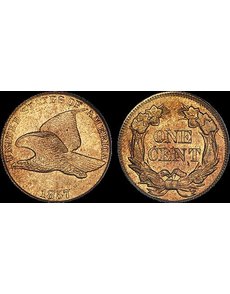 Flying Eagle cents brought much needed silver into the coffers of the U.S. Treasury Department. The silver was then minted into Seated Liberty coins.

The Bust coinages saw their reign in U.S. coinage end in 1839, with the minting of the last Capped Bust half dollar and the beginning of production of the Seated Liberty silver coinages.

Still, despite continued production of U.S. silver coins, foreign silver coinage, much of it from Spain’s American colonies, maintained legal tender status in the United States. However, less than 20 years later, the Coinage Act of 1857 took effect. As a result, the legacy of Spanish Colonial silver coins in circulation was about to end. In addition, the 1857 act brought about significant change to the pure copper large cent.

Much like today, the metallic content of the cent exceeded the face value of the coin in 1857. Government officials, to stem the monetary loss from minting the cent, decided to reduce the size and change the composition to reduce costs and restore profitability to our basic denomination. We today know the resulting coin as the Flying Eagle cent.

The Coinage Act of 1857 also provided for finally removing the worn Spanish Colonial silver coins still circulating in commerce to the tune of an estimated $3 million dollars in value.

The Mint set artificially high rates on the redemption of these pieces to assure recalling as many examples as possible. They were to be exchanged for new Flying Eagle cents only. The increased profit from the new cents would offset the premium being paid for the worn out silver coins.

The new Flying Eagle cents were actually our first “nickels”! They quickly gained the nickname “nickel” because of the 88 percent copper and 12 percent nickel alloy used to mint them. They also were not legal tender, a fact that would soon hurt their popularity.

When they were first issued, the new cents carried a small premium. People who did not want to stand in long lines to exchange their silver paid a premium to purchase some of the “new” cents either for souvenirs or novelty.

Soon the marketplace became inundated with the new small cents, and because they were not legal tender, stores and banks soon refused to accept the coins as the overabundance became a nuisance. The cents ended up trading at a discount of up to 5 percent. Ironically, just a few years later, all these cents would disappear from circulation during the Civil War, necessitating issuance of the cent-size Civil War tokens to keep the economy functional during the war.

The Flying Eagle cents brought much needed silver into the coffers of the U.S. Treasury Department, as was expected. This silver was then minted into Seated Liberty coins.