Elect to collect coins of Cyzicus 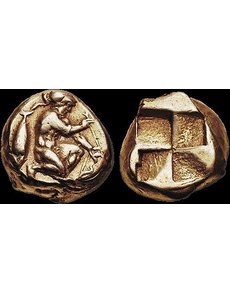 On this Cyzicus stater issued circa 500 to 450 B.C. a warrior crouches to test an arrow as he holds a bow. The tunny fish appears prominently in the field behind the archer. 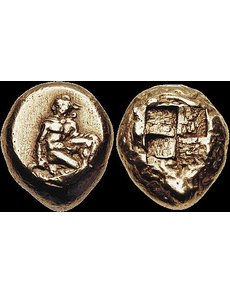 The hero Perseus holds a harpa knife and the severed head of Medusa (partially visible) on this electrum stater of the fifth to fourth centuries B.C. 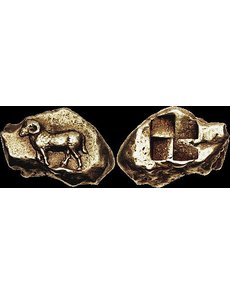 This electrum stater of Cyzicus, struck circa 500 to 450 B.C., shows a standing ram. The fish (arrow) below the ram’s hooves is barely visible due to an irregular planchet. 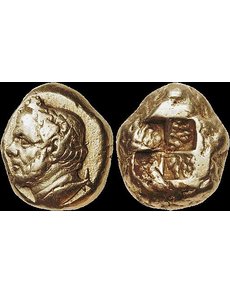 It has been suggested that the portrait on this electrum stater of Cyzicus of the fourth century B.C. is the Athenian general Timotheus or the Macedonian King Philip II.

Some of the most impressive coins of the ancient world were struck at Cyzicus, a port city ideally located between the Black Sea and the Aegean Sea.

Cyzicus was founded in the seventh century B.C. on an island along the southern shore of the Propontis, which at some point was linked to the mainland. Its coins were well known to merchants who sailed the Aegean and Black seas, notably along the trade route from the Crimea to Athens.

Most cities along the Black Sea coast were exotic by Greek standards. Many different people lived in the region: Thracians to the west, Scythians and Asiatic nomads to the north, people of the Caucasus Mountains in the east, and still others from the Anatolian plateau in the south. Many valuable products were imported from the coasts of the Black Sea to the heart of the Greek world. Foremost among them was grain, which Athens heavily relied upon to feed its citizens. However, gold, amber, slaves, fish, iron, timber, hemp and linen cloth, and many other goods all flowed to the Aegean world, often in exchange for Cyzicene staters.

These coins were struck in electrum, an alloy of gold and silver. Throughout more than two centuries of production, the formula was relatively consistent at about 55 percent gold, 40 percent silver and 5 percent copper — even if the color of the metal was quite variable.

The Cyzicene stater is one of the most attractive of all ancient coinages, featuring many original designs engraved in fine style. Since researchers have identified more than 290 known designs, the idea that each type represented an annual emission has been long abandoned.

Coins of many denominations were struck at Cyzicus, five of which were made of electrum. The most valuable of these was the stater, with electrum fractions weighing 1/6, 1/12, 1/24 and 1/48 of a stater. With the passage of time, these fractional issues became less and less important, and, eventually, only staters were produced. Alongside these were many types of silver and copper coins, most intended for local circulation.

The earliest coins of the western world were made of electrum, which continued to be the metal of choice until about 550 B.C., when the Lydian King Croesus (circa 561 to 546 B.C.) began to strike coins of pure gold and pure silver. In doing so, he ushered in a new era in which silver or gold issues generally were preferred over electrum.

Croesus’ innovation, however, did not deter the people of Cyzicus, who from about 550 B.C. onward produced their “archaic” electrum coinage. The city clearly enjoyed a great deal of independence, even if during that time it was subject either to Persian or Athenian rule. Indeed, it only stopped coining electrum when the city fell under Macedonian rule with the arrival of Alexander the Great in 326 to 325 B.C.

Several other cities in Asia Minor also issued electrum coinages after the time of Croesus, but by the fifth century B.C. only Mytilene, Phocaea and Cyzicus were still producing large issues — and only Cyzicus was consistently issuing staters.

Staters of Cyzicus were so familiar that often they are nicknamed “Cyzicenes” in ancient inscriptions. These coins appear to have been struck mainly to support trade, but they also were valued by mercenaries.

Xenophon, when writing about events that occurred from 401 to 399 B.C., described Cyzicene staters as being worth a month’s pay for a soldier. In another passage from that same work, Xenophon describes a Persian gold daric as a month’s pay for a soldier, which suggests these two important coinages were essentially of equal value. This would make sense: the Cyzicus stater weighed about 16 grams, and the Persian daric about 8.35 grams, with Cyzicene electrum typically being about 55 percent gold.

The Cyzicenes went to great lengths to make their staters old fashioned. Not only did they use electrum — an archaic choice — but they clung to other archaic traditions: thick, chunky planchets (when most coins were being struck on broad, thin planchets), a utilitarian “punch” for the reverse (when most coins had artistic designs on both sides), designs that often were purposefully engraved in an archaic style, and — barring one exception — no inscriptions (when most other coins bore inscriptions that identified the issuer).

Even though the Cyzicene stater had no inscription or recurring main design type, the coin’s distinctive features made it unmistakable. Furthermore, it had one consistent design element: the tunny (tuna fish). This fish must have been a very familiar sight to local merchants, as great shoals passed by en route to the Aegean.

The precise chronology of these coins is not known, though good efforts to organize them have been made based on evolution in style of the obverse designs and of the formatting of the incuse punches. Other tools, if fully exploited, might help to establish order, including a die link study of the incuse punches, a fine-tuning of the historical context for some designs, and perhaps an exhaustive study of the composition of the electrum, including its lead isotopes.

The artists who engraved dies for Cyzicene staters were especially conscious of the shapes of the planchets, which sometimes were round, but most often were oblong. Human forms usually are shown crouching, bending, kneeling or in a running-kneeling position rather than standing in full-figure. Some of the design usually is missing due to an imperfect strike.

Finally, if these coins are any measure, the people of Cyzicus had a robust sense of humor. There is a great deal of levity in some of their designs, as their artists would engrave the most extraordinary beautiful figures and yet show them holding a tunny by its tail as if it was being taken to the kitchen. Few ancient Greek mints engaged in any humorous treatments of their coin designs, and none to the extent of Cyzicus. ¦