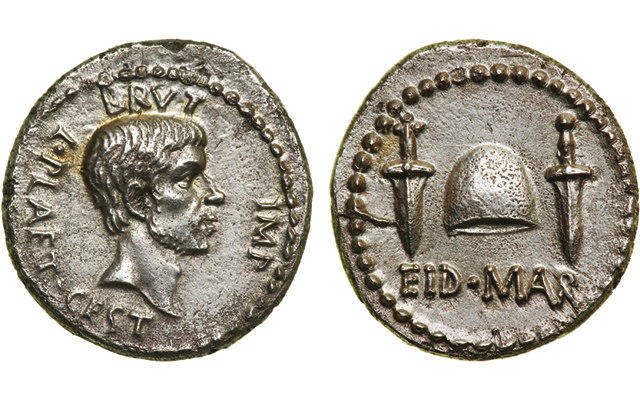 One of the nicest examples of the most famous ancient coin of all time, this Eid Mar denarius of Marcus Junius Brutus realized $517,000 during Ira & Larry Goldberg Coins & Collectibles’ June 3 auction. 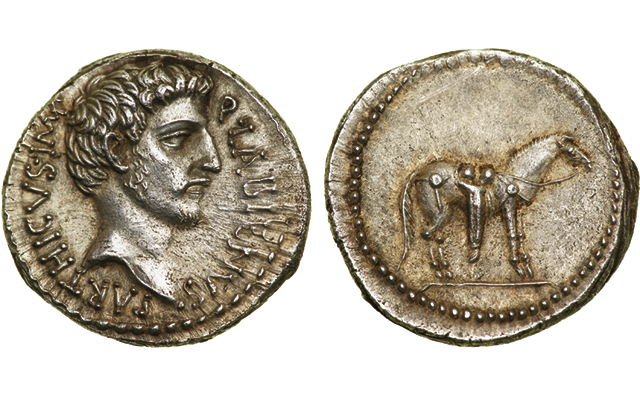 A silver denarius of Quintus Labienus was issued in 40 B.C. while the leader was fighting in Syria or southeastern Asia Minor. In “Superb Extremely Fine” condition, it realized $235,000. 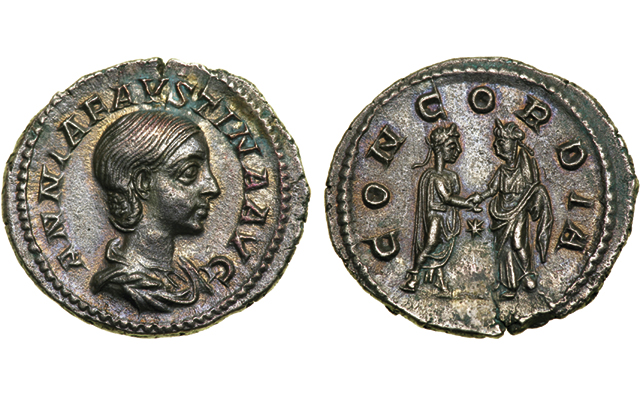 Annia Faustina’s marriage to the much younger Elagabalus was short-lived. This silver denarius issued in A.D. 221 is one of only five known, and sold for $223,250, a record auction price for a coin of a Roman empress, according to the firm.

The collection of 232 lots realized $3,335,273 (including the buyer’s fee) with many single-coin records broken, according to the firm.

The chief highlight of the Denarii Collection was one of the finest known examples of what may be the most famous ancient coin ever, the “Eid Mar” silver denarius from 42 B.C., which reached a record price of $517,000, including the 17.5 percent buyer’s fee.

The circa late autumn 42 B.C. silver denarius is known as the Eid Mar or “Ides of March” coin for the Latin legend EID MAR on the reverse. The reference is to the assassination of Julius Caesar two years earlier, on March 15, 44 B.C. The coin is also famous for the image of one of the assassins, M. Junius Brutus, on the obverse.

It was accompanied by a photo-certificate from Numismatic Guaranty Corp., which states the coin is the only example it has certified. NGC graded the coin Choice About Uncirculated, noting that its strike quality is 5/5, that surface quality is 3/5 and the coin is of Fine Style.

One of those is the 40 B.C. silver denarius of Quintus Labienus, struck at an uncertain mint in Syria or southeastern Asia Minor.

The coin realized $235,000, and reflects the turbulent Imperatorial coins issued by generals without sanction of the Roman Senate.

While Labienus was gone from Rome, the alliance to which he was party was defeated. Instead of returning, he fought back with the help of Parthians, but was defeated and killed.

Labienus appears on the coin’s obverse, a Parthian style horse and archer’s bow on the reverse.

After Labienus’ death, most of the coins must have been melted, explaining their rarity today.

This example was graded “Superb Extremely Fine” by the auction house.

A toned Annia Faustina silver denarius of Augusta realized $223,250 (with buyer’s fee), establishing the highest price ever paid at auction for a Roman empress coin, according to Ira Goldberg.

Issued under Elagabalus, Annia’s husband, the coin is one of only five pieces known and is graded Extremely Fine by the auction firm.

The obverse shows Annia individually; the reverse shows her with her second spouse, Elagabalus (a short-lived arrangement).

Another coin of historical importance was the silver denarius struck in Carthage by Clodius Macer during the Roman Civil War of 68 A.D.

Graded Superb Extremely Fine by the auction house, the coin realized $205,625 (including the buyer’s fee).

It is one of perhaps 20 of the so-called “portrait denarii” of Macer in existence today, and among fewer than 85 coins of all types for Macer, who was propraetorian legate (basically, an administrative governor) in Africa late in Nero’s reign.

Macer was captured and executed on the order of Galba, and at that point, the coins Macer issued were recalled and melted at the Carthaginian Mint.

Only a small portion of his coins showed a portrait of Macer, who was “putting the best face on his own actions while at the same time reassuring the people that his money was sound,” according to the catalog.

Full auction results are available at the firm’s website.