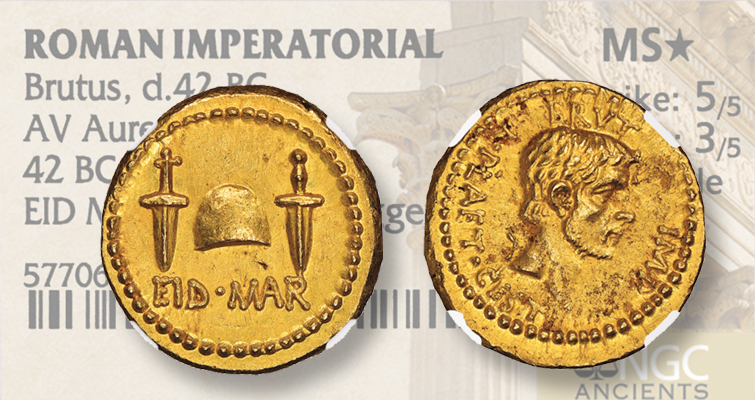 A gold EID MAR aureus of Brutus, celebrating the murder of Julius Caesar two years’ prior, realized a record sales price Oct. 29 in a London auction. The coin realized the equivalent of $4,188,393 U.S., including the 20 percent buyer’s fee.

The coin is the only publicly available example of the rarity, which, like the more abundant though still rare silver versions, was issued for Brutus, one of the conspirators in the death of Julius Caesar. It sold during a Roma Numismatics auction in London, and its sale price reflects the 20 percent buyer’s fee.

Silver examples (called a denarius) are rare; they can easily command half a million dollars U.S., and the silver version was selected as the No. 1 coin in the survey of the book 100 Greatest Ancient Coins, by Harlan Berk, published by Whitman.

The coin was struck by a military mint traveling with Brutus in the East, late summer-autumn of 42 B.C.

What makes it special?

The coin is famous for the act it commemorates, as well as the irony of the image on the obverse.

Contrary to popular belief, it wasn’t only Brutus who assassinated Julius Caesar, at least 30 Roman senators conspired to commit the murder. Caesar was stabbed 23 times.

In 44 B.C., M. Junius Brutus and C. Cassius Longinus led the charge in the Roman senate to topple the rule of Julius Caesar, who had been proclaimed dictator for life and ruled with absolute authority. Three months before he was assassinated, Caesar placed his own image on Roman coinage, upending tradition and decorum — never before had a living ruler’s portrait appeared on Roman coinage.

Civil war broke out in the months after the assassination, and the conspirators were sent fleeing from Rome, to join forces in early 42 B.C. as war loomed.

The conspirators faced off with the armies of Octavian and Mark Antony (who were among those leading the empire), first with the Battle of Philippi on Oct. 3 and, 20 days later, with the final showdown.

Brutus beat back the forces of Octavian in the first battle, but Cassius and his legions were routed by Antony. Hearing (incorrectly) that Brutus had been defeated and killed, Cassius committed suicide.

Brutus led all the forces in the second battle but was overmatched. After being soundly defeated, he committed suicide.

The coins were issued to pay Brutus’ troops and other expenses.

In addition to the famous legend (noting when the republic was freed from Caesar’s tyranny), the reverse depicts the pileus, or cap of liberty traditionally given to slaves when they were freed, between the daggers representing the death of Caesar.

Given that Roman coinage was generally a vehicle of propaganda, it is only natural that Brutus would boast of his involvement in overthrowing Caesar.

The fact that Brutus placed his own image on the obverse, however, is ironic, even in light of the fact that the triumvirs ruling Rome at the time had adopted the practice.

The gold aureus bests a gold Pantikapaion stater that sold in 2012 from the Prospero Collection for $3.8 million, a sale that was notable for the unpaid bills of a big-time bidder.

Aaron Berk, representing Harlan J. Berk Ltd., was the underbidder for the coin, and he shared a video of the bidding action on social media.

After being asked whether the firm would identify the consigner and winning bidder, Alice King, client manager at Roma, told Coin World, “Unfortunately, we have not been authorised to disclose that information.”

The other gold examples are display at the British Museum, and in the permanent collection of the Deutsche Bundesbank — the central bank of the Federal Republic of Germany

Prior to the auction Richard Beale, managing director of the London-based auction house Roma Numismatics Limited, said: “We are extremely privileged to bring this coin to auction with the invaluable assistance of Numismatic Guaranty Corporation (NGC), whose expert specialists have assisted in authenticating it.”

The gold aureus in the Roma auction was graded by NGC as Mint State (star), with a 5/5 on strike, 3/5 on surface, and denoted as Fine style.

The gold aureus weighs 8.06 grams and measures 19 millimeters in diameter, or smaller than a Jefferson 5-cent coin but heavier than a Washington quarter dollar.

Watch the bidding for this historic coin

Help us choose the Most Influential People in Numismatics. Make your selections. 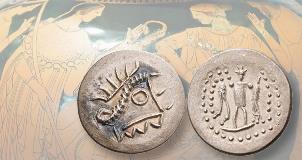 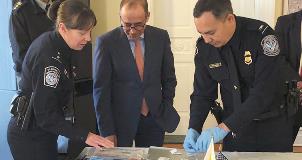 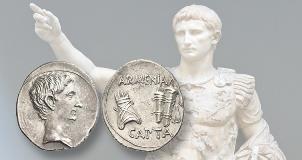