Egyptian coinage under the Romans 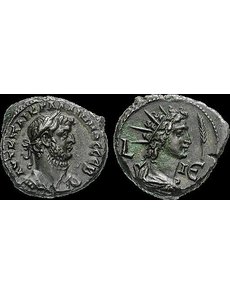 This billon tetradrachm of the Emperor Gallienus (A.D. 253 to 268), struck in the last year of his reign, portrays on its reverse the sun-god Helios. 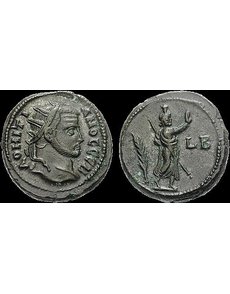 The last provincial coins of Roman Egypt were struck by the rebel Domitius Domitianus, such as this billon “octodrachm” struck in his second year, circa A.D. 297 to 298. 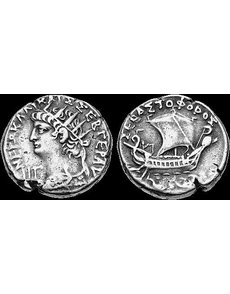 A Roman grain ship is shown on the reverse of this billon tetradrachm from the 13th year of the reign of the Emperor Nero (A.D. 54 to 68). 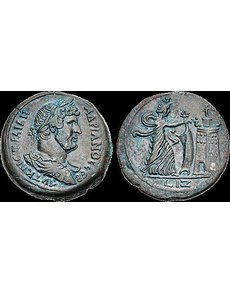 The goddess Isis holds a billowed sail as she approaches the famous lighthouse of Alexandria (Pharos) on this bronze drachm of Antoninius Pius struck in A.D. 132 to 133.

Most ancient coin specialists would agree that many of the world’s most fascinating coins were struck in Roman Egypt.

The coinage seamlessly blends Egyptian, Greek and Roman cultures like no other objects of antiquity, and the series is so diverse that no collector can hope to form a “complete” collection.

Except for the most common issues of the third century A.D. — which survive in quantity — the series has become increasingly difficult to collect due to a surge in interest. It has revealed how scarce these coins truly are, and most collectors seem content to hold on to the Roman Egyptian coins they have been fortunate enough to acquire.

The series began when the Roman warlord Octavian (better known as Rome’s first emperor, Augustus) emerged victorious at the Battle of Actium in 31 B.C. One of his opponents was Cleopatra VII (51 to 30 B.C.), the Greek queen of Egypt, whose empire thus came under Roman control.

Since Egypt was fertile and was strategically located, the emperors kept it under especially close control, denying the Roman Senate any important role in its governance. The Romans allowed government business to be conducted in Greek, which had become the lingua franca of Egypt after three centuries of Greek rule. This, of course, meant the inscriptions on the coins were in Greek.

Initially, Augustus struck Roman coinage in Egypt in accordance with Cleopatra’s issues. However, sometime before 2 B.C. he introduced new bronze denominations. His successor, Tiberius (A.D. 14 to 37), found it necessary to reintroduce tetradrachms of low-grade silver (“billon”), as none had been struck since Cleopatra’s defeat some 50 years before.

At about 31 percent silver, Tiberius’ tetradrachms were not impressive, yet they contained about 4 grams of silver, and thus were the intrinsic high point of a series that would endure for 275 years. Within 50 years the amount of silver had been nearly halved, and it would steadily decrease over time. Many later tetradrachms in the series contain less than 2 percent silver.

The output of tetradrachms in Roman Egypt may have peaked under Nero (A.D. 54 to 68), who from A.D. 64 to 68 is thought to have issued more than 600 million pieces. Nero had a motive: He withdrew tetradrachms from circulation and replaced them with newly struck coins of lower purity and lower weight. In doing so, he may have netted a profit of more than 3,500 tons of silver.

By the reign of Vespasian (A.D. 69 to 79) the basic monetary system of Roman Egypt was firmly in place and a whole range of denominations were being struck in quantity: billon tetradrachms and bronze drachms, hemidrachms, diobols, obols and dichalcoi. Especially important among the base-metal issues was the drachm, a broad, heavy coin that today is coveted by collectors.

The series covers nearly three centuries and was the longest-lasting provincial coin series. It is virtually complete in terms of issuers from the foundation of the empire through the late third century A.D.

Except for Caligula (A.D. 37 to 41) and Didius Julianus (A.D. 193), Roman Egyptian coins were struck for every emperor who was confirmed by the senate in Rome, making it possible to acquire a good Roman portrait gallery without straying outside the series.

One excellent feature of Roman Egyptian coins is that most of them are dated according to the regnal year of the ruling emperor, allowing them to be dated to a maximum period of one year. The dates are reckoned according to the calendar year at Alexandria, which usually began on Aug. 29. Thus, “years” at the start or end of an emperor’s reign tend to be partial years. Sometimes they can be quite short, especially since it often took weeks (or months) for news of a change in regime to reach the mint at Alexandria in Egypt.

Perhaps the most remarkable aspect of this coinage, however, is the bewildering array of reverse types. Thousands of individual issues and hundreds of unusual types were struck, including chariot scenes, architectural types, and the most bizarre and complicated fusions of ancient gods that one could imagine.

Top honors in this regard go to the Emperor Antoninus Pius (A.D. 138 to 161), who issued so many spectacular reverse types that his coinage eclipses all others. He is particularly famous for his types devoted to the zodiac and the labors of Hercules, both of which are avidly collected.

The mint at Alexandria also struck coins honoring 48 nomes, the geographic units into which the province of Egypt was divided for administrative purposes. The first nome coins were struck by the Emperor Domitian (A.D. 81 to 96) in 91 to 92, but the heyday was from 107 to 145, during which three major issues were produced.

Historically important coinages were also struck in Egypt for the local rebel Domitius Domitianus, and for Vabalathus and Zenobia, rulers of the Syrian city of Palmyra who extended their authority as far south as Egypt.

The earliest issues of Vabalathus were struck jointly with the reigning Roman Emperor Aurelian (A.D. 270 to 275); since the portrait of Vabalathus is on the obverse, and that of Aurelian is relegated to the reverse, it was clear who was in charge. The rebel soon declared his independence from Rome, and his next Egyptian coinage was issued solely in his name and in that of his mother, Zenobia. These independent issues are rare and enjoy great demand from collectors.

Since the revolt of Domitius Domitianus was based in Egypt, his takeover of the local mint was to be expected. Despite having his hands full with political, economic and military concerns, the rebel was inclined to change the coinage system in Egypt. His new denominations are not reliably understood, but they may have been the octodrachm, tetradrachm and didrachm.

With the rebel’s overthrow in 297 or 298, the senior reigning emperor, Diocletian (A.D. 284 to 305), ended “provincial” coinage in Egypt. The local issues of Egypt were replaced by imperial coinage of the type then being struck throughout the empire, thus bringing to an end one of the most remarkable series of coins of the ancient world. ¦