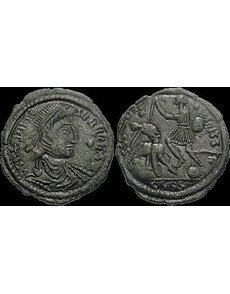 This barbarous bronze coin imitates an issue of the Emperor Constantius II (A.D. 337 to 361) or Constans (337 to 350). On the reverse a Roman soldier spears a barbarian horseman. 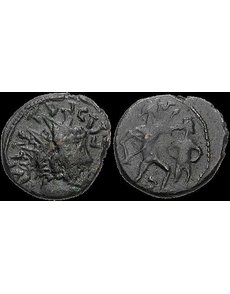 This “barbarous radiate” of the late third or fourth century A.D. imitates an issue of the Romano-Gallic Emperor Tetricus II (A.D. 273 to 274). The reverse shows a soldier and captive. 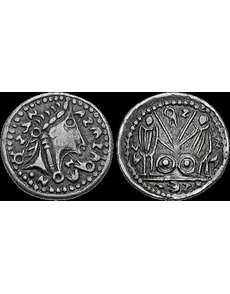 This Germanic imitation of a silver denarius of the Emperor Augustus (27 B.C. to A.D. 14) is an impressive work of art that cleverly distorts the designs of its Roman prototype.All images courtesy of Classical Numismatic Group, www.cngcoins.com. 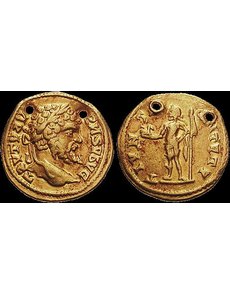 Imitations of Roman coins were made in southern India, where Romans acquired goods. This holed piece copies a gold aureus of the Emperor Septimius Severus (A.D. 193 to 211).

It often is said that imitation is the sincerest form of flattery. If this yardstick is applied to Roman coinage, we must conclude that it was much admired, as it was frequently imitated in the Mediterranean world and beyond.

Some of these copies were made by those living within the Roman world to alleviate regional coin shortages, whereas others were made well outside Roman territories to create original coinages inspired by Roman prototypes. Still other kinds of imitations, such as plated counterfeits, are of a different category altogether, as they were never intended to serve a legitimate function.

Most circulated imitations of Roman coins are relatively inexpensive, even though they are significantly rarer than their official counterparts. For collectors who are drawn to the cultural fringe of the Roman world, no other artifacts are as readily available or as affordable as these intriguing items.

The earliest imitations of Roman coins were produced during the Republic, largely in the second and first centuries B.C. Most were bronzes struck or cast in the western part of the Mediterranean and silver denarii issued by “Celtic” tribes in Eastern Europe.

Roman coins were copied on a much larger scale during the Roman Empire (27 B.C. to A.D. 476), starting with those of Rome’s first emperor, Augustus (27 B.C to A.D. 14). His silver denarii and copper asses were most frequently copied.

Perhaps the first major effort, however, occurred in the mid-first century A.D. Base metal coins of the emperor Claudius (A.D. 41 to 54) were imitated on a large scale in Britain, Spain and Gaul to alleviate a regional coin shortage. Claudius’ reintroduction of imperial base metal coins in the West in the early 40s may have prompted a new demand for those coins that does not appear to have been met until Nero (A.D. 54 to 68) began to strike imperial bronzes at Lugdunum (Lyon, France) starting in 64.

The largest of the Claudian copies were modeled after the Roman sestertius, but since the fake coins typically weighed less than the originals, Roman officials often countermarked them with the letters “DV” to legitimize them as a less-valuable Roman brass coin, the dupondius.

Much later, in the second and third centuries A.D., silver denarii were copied in large numbers. Sometimes they were struck in good silver with dies of barbarous style, but more often they were base metal pieces cast in molds that sometimes were made from authentic denarii. They are called limes denarii because they commonly are found along the borders or frontiers (limes) of the Roman Empire.

It is unlikely that limes denarii were intended to deceive, as most are not convincing substitutes for the originals. Instead, they probably were meant to circulate as low-value pieces at a time when not enough small copper coins were circulating in the provinces.

Some of the most remarkable Roman coin imitations were produced in the southern districts of India, where Rome had thriving trade relations. For centuries the Romans had paid out gold and silver for luxury goods and raw materials in India that could not be acquired in the West.

Many copies of Roman gold aurei and silver denarii have been found in India, often in hoards that also contain authentic Roman coins. Though Roman silver was not much used there after the Julio-Claudian period (27 B.C. to A.D. 68), Roman gold was popular for centuries afterward. Copies of aurei range from extraordinarily faithful imitations to those that strongly reflect local style. Many of these pieces are bent, mounted, pierced, test-cut or have punch marks.

From the 260s to 280s, imitations of Roman coins were produced on a very large scale due to a spike in military and financial crises.

Most imitations of this period were struck in the regions now comprising Britain, France, Germany and their neighboring nations. These imitations usually are called “barbarous radiates” because their most pronounced design feature is the radiate crown that adorns the portrait.

They copy the official double-denarii (antoniniani) of the Roman Empire and the break-away Romano-Gallic Empire. They often were made without much care and their diversity is remarkable, with greatly varying weights, diameters, artistic styles, designs and production methods.

Barbarous radiates were issued on such a large scale that there must have been massive, well-organized facilities. Most portraits and reverse types are based on Roman prototypes, though the inscriptions often are missing, or are merely random lines approximating the Latin inscriptions of the official coins.

Some rare and fascinating items of this era that may fall under the heading of “barbarous radiates” bear the names of Bonosus and Proculus, military commanders who in A.D. 280 led a rebellion based in Cologne, Germany. Debate is persistent as to the authenticity of these items. If ancient, there is no way to know whether they were “official” issues of the rebels or if they were items of private manufacture that happen to bear their names.

Imitations of Roman coins from the next era, the Tetrarchy (circa A.D. 284 to 313), are less common than those of the 260s and 270s. However, it would seem that large quantities of billon nummi (folles) were copied, mainly in Egypt, based upon the number of forgers’ molds that survive.

The silver coin of the Tetrarchic era, the argenteus, was also imitated. This is rather surprising since the originals usually were hoarded or were exported to the East through the channels of trade, and thus seldom circulated.

The production of imitations again increased in the Constantinian Era (circa A.D. 313 to 364). By the 320s the small billon coins of the empire were being copied on a grand scale in the Balkans and in the Near East, presumably to address a lack of official coinage in some regions. As with copies of earlier periods, a wide range of styles and production methods exist, suggesting they were made in many places and under a variety of circumstances.

Imitations of Roman coins continued to be made until the fall of the empire in A.D. 476, and long afterward. Distinctive copies were produced well into the era of Byzantine coinage (A.D. 498 to 1453) by people of numerous cultures, including the Vandals, Ostrogoths, Visigoths, Merovingians, Burgundians and Gepids. ¦