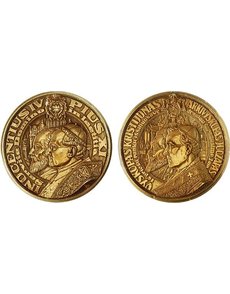 Petras Rimša designed this Lithuanian medal, and the Swiss firm of Huguenin Fréres in Le Locle struck it, in celebration of the creation of an ecclesiastical province separated from Poland.

Lithuania’s premier 20th century medalist was Petras Rimša or Rimsha, born 1881 at Naudziai, and died at Vilnius in 1961.

A fiery Lithuanian patriot, that this artist was born and died during periods of Russian domination over his native land was ironic. His medallic art flourished during the first period of modern Lithuanian independence, 1918 to 1940.

On Feb. 16, 1918, the Lithuanian Taryba or Council declared independence from Germany, Russia and “other unions,” specifically that which had existed with Poland. Resurgent Poland under Marshal Jozef Pilsudski sought restoration of that union, setting the stage for 20 years of strife.

Though the Oct. 7, 1920, treaty of Suvalkai between the two nations recognized the ancient capital of Vilnius (Polish Wilno, Russian Wilna) as Lithuanian, invasion by Polish Gen. Lucjan Zeligowski’s forces established a Republic of Central Lithuania that was soon absorbed by Poland. Medalist Rimša was to create a number of medals vigorously protesting this annexation.

Skvireckas was a noted scholar and theologian who translated the Bible into Lithuanian.

This arrangement called for great papal diplomacy as both countries were overwhelmingly Catholic and in continued conflict over the Vilnius question.

Rimša designed a medal hailing creation of the new church province, struck by the Swiss firm of Huguenin Fréres in Le Locle in 25-, 36-, 60-, 75- and 100-millimeter sizes.

The obverse presents conjoined busts of Popes Innocent IV, founder of the first diocese of Lithuania in 1251, and Pius XI (reigned 1922 to 1939), with Latin legend “Serve the Lord with Joy.”

The reverse portrayed the first Lithuanian bishop, Kristijonas, and the newly appointed Archbishop Skvireckas with Lithuanian legend “Having freed ourselves from the Enemy’s Hands, We shall Serve with Greater Courage.”

This medal is elusive as Rimša was famous for the startlingly high prices he demanded for all his medals, possibly explaining the rarity of most of them today.

Poland was finally able to force Lithuanian recognition of the contested frontier of 1920 and the loss of the capital, only to face another violent partition under the Hitler-Stalin Pact of 1939. For several months Lithuania enjoyed renewed possession of long-lost Vilnius before the Soviet Red Army subjugated all of the Baltic states.