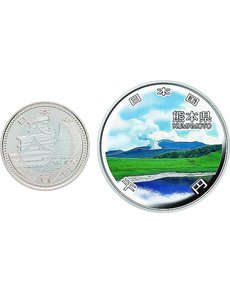 Kumamoto Castle is the theme for the prefecture’s 500-yen coin, and the Kumamoto 1,000-yen coin shows Mount Aso, a caldera belching clouds of smoke. 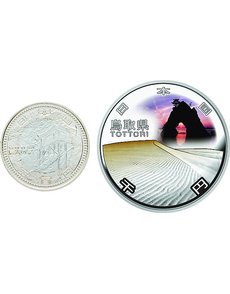 A precariously perched temple hall is featured on the 500-yen coin for Tottori, while the region’s sand dunes and scenic rock grace the 1,000-yen coin. 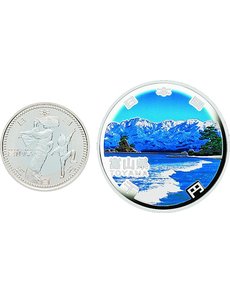 The March 11 earthquake and tsunami that devastated Japan also had a ripple effect for the numismatic community that collectors have just learned about.

Though Japan Mint officials in mid-March noted that the agency’s product schedule was unaffected by the dual tragedies, attendees of the Japan Mint’s World Mint Stage presentation Aug. 18 at the American Numismatic Association World’s Fair of Money in Rosemont, Ill., were told that the events in March delayed the Japan Mint’s commemorative coin program. The program offers 500- and 1,000-yen coins for each of the nation’s 47 prefectures.

Release of the coins that were planned as the 14th issue in the series honoring all 47 of Japan’s prefectures, in this case honoring Kumamoto, were postponed, with the 15th (for Toyama) and 16th (Tottori) issues moved ahead one spot in the issue plan. The Kumamoto coin takes the former place of the Tottori issue.

The delay also pushed back the international issuance of the 500-yen coins, which were originally due in early August, to early September (they were released to Japanese banks on July 20).

The program, announced in 2008, celebrates each of Japan’s 47 prefectures. Authorized for each prefecture is a circulating 500-yen coin and a colorized Proof 1-ounce silver version, companion pieces. The program runs through 2016.

Each 500-yen coin (worth about $6.49 in U.S. funds) is composed of 75 percent copper and 12.5 percent each of zinc and nickel. They weigh 7.1 grams, measure 26.5 millimeters in diameter and have estimated mintages of about 1.8 million coins per prefecture.

The 500- and 1,000-yen coins feature reverse designs common to each denomination. The common 500-yen reverse shows an unspecified historic Japanese coin, surrounded by English and Japanese inscriptions indicating the name of the program and the denomination. The standard reverse of the 1,000-yen coin shows snow crystals, the moon and cherry blossoms.

The 500-yen coin for Toyama honors the Owara Kaze-no-Bon festival. The “Bon dance of the wind” is performed nightly during a three-day festival every September in the small, remote town of Yatsuo.

The dancing ceremony, which has been held for some 300 years, is said to help appease the wind and ensure an abundant harvest. Male and female dancers perform different styles of dance while wearing woven hats low over their eyes while folk songs provide the tempo amid rows of thousands of paper lanterns.

The Tateyama Mountain Range and the Amaharashi Kaigon (or “rain-clear”) coast, a natural attraction in Toyama, are honored on the 1,000-yen coin.

The mountain range, called Mount Tateyama, has three peaks and at its highest point rises some 3,015 meters (9,892 feet). It is considered one of three of Japan’s “Holy Mountains.” People believed they could visit with spirits from the afterlife by visiting its deep valleys for worship. Mount Tateyama rises high above Toyama Bay in the center coastal region of Japan, facing the Sea of Japan to the north.

Nageiredo Hall at the Sanbutsu-ji Temple, a site perched some 520 meters (1,706 feet) up on a cliff wall, is featured on the 500-yen coin for Tottori.

It is also known as “Thrown-in Hall,” as legend suggests an ascetic at the foot of the mountain threw the temple into place. The hall dates to circa 706.

The Tottori Sand Dunes, coastal sand dunes off the coast of the Sea of Japan, are featured on the 1,000-yen coin.

The dunes (the only large dune system in Japan) measure 16 kilometers (about 10 miles) from east to west and 2 kilometers (about 1.2 miles) from north to south. A scenic point on the coast called Senkan Matsushima, a rock formation with a sole pine tree perched on top, appears in the background on the silver coin.

Kumamoto Castle, built in 1607, is famous for its stone wall featuring a graceful curved line. The stone wall becomes steeper as it ascends in order to stop enemies from entering. The castle is one of Japan’s premier castles.

The 1,000-yen coin for Kumamoto depicts Mount Aso, the largest active volcano in Japan, which features one of the world’s largest calderas, measuring some 75 miles in circumference. Clouds of smoke rise from the caldera on the silver Proof coin.

Two distributors will offer the silver 1,000-yen coins to American collectors as they are released; the Toyama coin is now available from PandaAmerica for $99 plus $7 shipping, while Euro Collections International prices the coin at $130 plus $10 shipping.