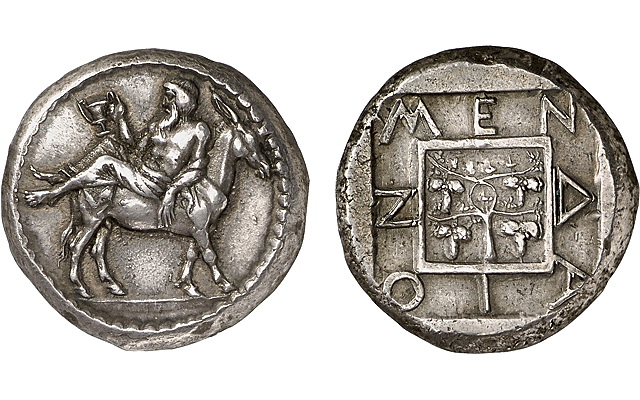 The obverse of this tetradrachm of Mende, struck in about 425 B.C., shows the god Dionysus holding a drinking cup filled with wine as he reclines on the back of an ass. A grapevine is central to the reverse. 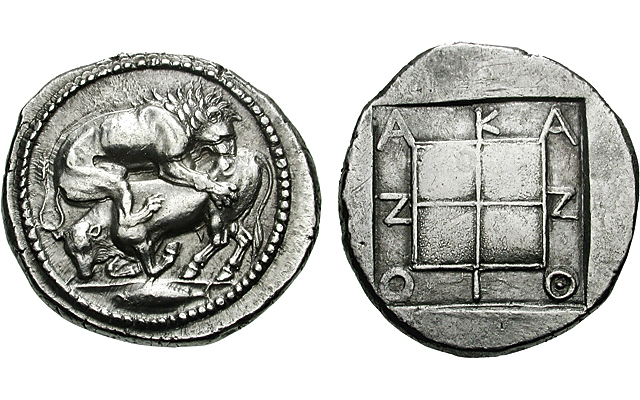 A lion is shown attacking a bull on this silver tetradrachm of Acanthus, struck circa 470 to 430 B.C. The reverse shows the name of the city surrounding a raised four-part square. 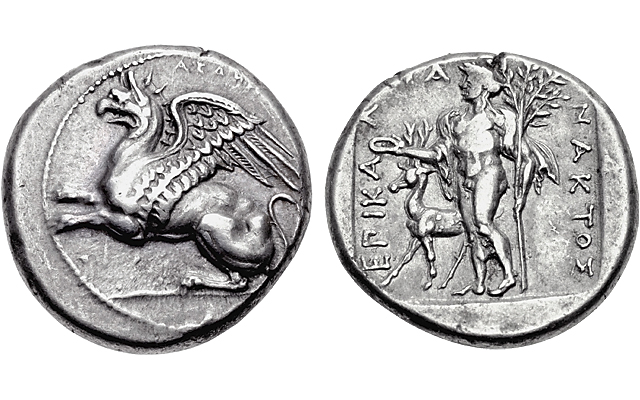 This tetradrachm of Abdera from the mid-fourth century B.C. shows a griffin springing to the left and the god Apollo, holding a branch and a phiale, standing beside a stag. 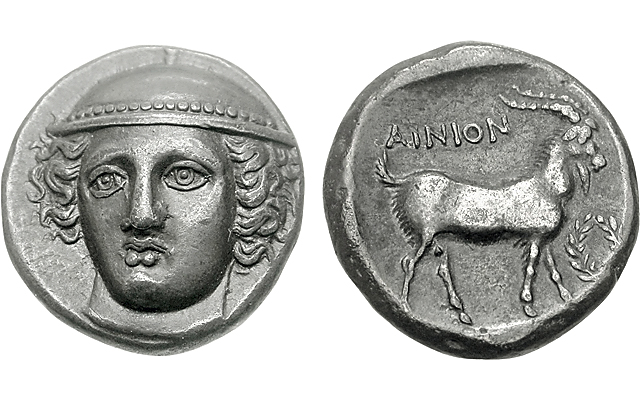 The facing head of the messenger-god Hermes is shown in fine style on this tetradrachm struck at Aenus sometime after about 375 B.C. The reverse shows a standing goat. 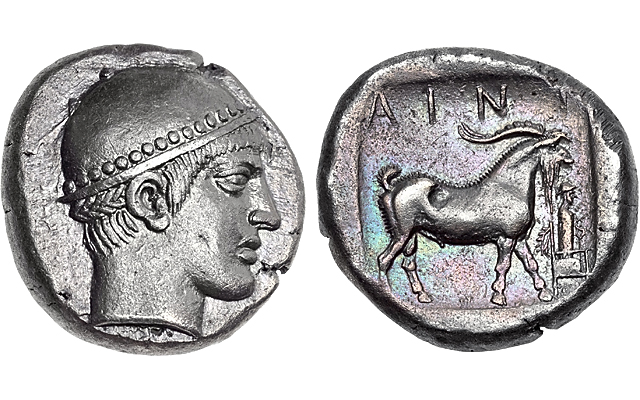 This tetradrachm of Aenus, struck sometime around 450 B.C., shows the profile head of Hermes and a goat standing before a herm, an ancient boundary marker, set on an altar.

The silver coins of Macedon and Thrace, the principal regions of northern Greece, have long been admired for their fine artistry and for the inventiveness of their designs.

The weights of these coins ranged greatly, from fractions of less than 0.2 gram to very large pieces, including dodecadrachms (12-drachm coins) that often weigh more than 40 grams.

In general, the pieces weighing less than 4 grams were made for local use, whereas the coins of 8 grams or more were routinely used in regional and international trade. Hoard evidence proves that these coins were dispersed widely, for they often are part of hoards found in Asia Minor, Syria, the Holy Land and Egypt — and sometimes in places even further afield.

Silver coins were produced by different kinds of authorities in northern Greece, including independent city-states, tribes and Greek-style kingdoms. Since the variety of northern Greek silver is so great, we’ll focus on the trade coins of Mende, Acanthus, Abdera, and Aenus, four cities that issued silver trade coins during the Archaic (circa 760 to 479 B.C.) and Classical (circa 479 to 350 B.C. or 336 B.C.) periods.

The Macedonian city of Mende was renowned for the quality of its wine and it had good reason to strike large silver coins that were suitable for export. Its earliest tetradrachms, struck from about 520 to 470 B.C., show on their obverse an ass standing, usually with a bird perched on its rump or with a grape cluster hanging from its mouth.

On these early issues the allusion to Dionysus, the god of wine, would have been clear to anyone in the Mediterranean world. However, on the next major series of tetradrachms, issued circa 460 to 423 B.C., the association with the god was even more explicit, for they show on their obverse Dionysus reclining on the back of an ass as he holds aloft a cup of wine.

This classic scene exemplifies a hedonistic and whimsical side of Greek culture. Dionysus was famous for his wild excesses, which on one extreme represented the peak of earthly pleasure and at the other the most callous, brutal and violent of behavior. He was credited with having invented wine and with having taught the Greeks how to cultivate grapes.

The reverse of the first tetradrachms of Mende had been impressed with a simple four-part punch, but the later issues bear an artistic design: the city name surrounds a vine laden with clusters of grapes. This type is dedicated to Dionysus in a greater sense, but also speaks directly to Mende’s lucrative wine trade.

Another important issuer of silver tetradrachms in the region was Acanthus, a city on the Chalcidice of Macedon. It seems to have taken its name from a plant that is common in the Mediterranean, and the flower of that plant often is used as a decorative element on its coins.

The design used at Acanthus for trade silver was one that would have been familiar to those who lived in the Mediterranean and in the Near East: a lion attacking a bull. This scene originated in the Near East and had been used in art at least since the fourth millennium B.C. It may have been derived from the Zodiac constellations of Leo and Taurus, but it came to embrace other ideas as well, including the struggle between predator and prey, and the cycle of life. Fortunately, the design is perfectly suited to the round planchets used for these coins.

The earliest of these tetradrachms may date to about 525 B.C., and they continued to be struck until about 350 B.C. During that period the general composition of the design remained consistent, though its details varied greatly.

Perhaps the most interesting evolution was in the artistry. The series began with a traditional Greek approach in keeping with the vigorous style of the Archaic period. The style next becomes “Orientalized” prior to the invasion of Greece by the Persian King Xerxes, whose army passed by Acanthus in 480 B.C. Thereafter the design embraces the mores of Greek art, this time in a style in line with the ideals of art of the Classical period.

The silver trade coins of another city of Northern Greece, Abdera, are also noteworthy. This city was ideally situated on the southern coast of Thrace, and though the colony that had been founded there in the seventh century B.C. failed, the one founded in 544 B.C. thrived. Its colonists hailed from Teos, a Greek city of Ionia, in Asia Minor.

With the city of Teos having been conquered by the Persians, most of its citizens fled, preferring to brave the hazards of finding a new home rather than live under Persian rule. The coins of Teos traditionally had shown a mythological griffin seated, raising one of its paws, and the colonists employed that same design on the coins of their new city, Abdera. However, there was a symbolic change: on the coins of Teos the griffin faced right whereas on those of Abdera it faced left.

The earliest of the large silver coins, struck from the late sixth through the early fifth centuries B.C., were octodrachms, the heaviest of this city’s coinage. A more substantial series of tetradrachms followed from circa 500 to 350 B.C.

Another beautiful series of trade silver was struck at the Thracian city of Aenus. Compared with Mende, Acanthus and Abdera, the coinage of this city began comparatively late, perhaps only by circa 450 B.C., and it lasted about a century. The obverse of Aenus tetradrachms invariably show the head of the god Hermes, wearing a close-fitting cap called a petasus, and the reverse shows a standing goat.

The head of Hermes initially is shown in profile, often in a severe style, and eventually it is shown three-quarters facing the viewer; this is a notably difficult task to achieve with any degree of success. The die engraving sometimes was extraordinary.

Though the reverse type of the standing goat remained constant, there was much variety due to the many different symbols that accompanied the goat. In one particularly appealing case, the goat raises one of its hooves playfully toward a rose plant. Another issue is also unusual in that the city name is moved to the obverse, where it is placed on Hermes’ cap.