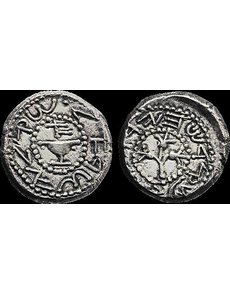 A prototype for the first Jewish coins, the silver shekel struck during the Jewish War circa A.D. 66, realized $1,105,375, including the 19.5 percent buyer’s fee, in a March 8 auction in New York City.

All images courtesy of www.HeritageAuctions.com. 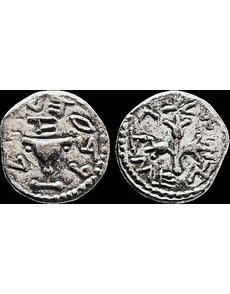 Silver quarter shekels from the Jewish War are rarities in their own right, with just five examples known, two from Year One. The better of those two examples sold March 8 for $896,250, including the buyer’s fee.

All images courtesy of www.HeritageAuctions.com.

Two coins, two known, $2 million; that’s the mathematical equation for a pair of coins that are each unique in private hands and that together sold March 8 for more than $2 million in New York City.

The coins, a silver quarter shekel and a silver shekel that date to the first year of the Jewish war from A.D. 66 to 70, were part of the Shoshana Collection, auctioned by Heritage Auctions.

The silver shekel realized $1,105,375, including the 19.5 percent buyer’s fee. The coin was a prototype design for the first shekel struck by the Jews in the Jewish War.

Jeff Rubinger of Antiqua Ancient Art & Numismatics in Woodland Hills, Calif., was the winning bidder, according to Heritage Auctions.

When the Jewish Revolt against the Romans broke out in A.D. 66 in Judea, Jewish fighters captured Jerusalem and the temple treasure became available. The silver (presumably the Tyrian coins that had been paid to meet tax obligations over the years) was used to strike shekel, half shekel and quarter shekel coins, and thus this coinage is viewed as the first act of independence.

The prototype, as with the later regular issues, depicts a ritual chalice surrounded by text on the obverse, with three pomegranates surrounded by an inscription that translates to “Jerusalem is Holy” on the reverse; a small ring of dots encircles the chalice on the prototype.

The type was unknown until the two coins were discovered in the late 1970s, both struck from the same set of dies. The prototype is 24 millimeters in diameter and 13.34 grams, or about the size of a U.S. quarter dollar, but a bit more than twice as heavy.

The other known example is in the collection of the The Israel Museum, Jerusalem.

According to the catalogers, the extreme rarity suggests the issue was very small, perhaps limited to a few trial strikes in the manner of a modern pattern. “Both the Shoshana and Israel Museum specimens display similar centering, with the reverse slightly off-center to left, suggesting the moneyers in Jerusalem had not yet perfected their techniques for striking such large silver pieces,” according to the lot description.

The major elements of the design were retained in the second generation issues, but the inner dotted border was removed and the Paleo Hebrew lettering rendered in a much less elaborate style.

In Good Extremely Fine condition, the coin had an estimate of $950,000.

According to David Hendin, writing in Guide to Biblical Coins, he had a chance to acquire one of these prototypes when they were unknown, but because the source was known for sometimes having dealt in fakes, he passed.

“While it looked authentic to me, I was not certain enough to overcome my doubts, and $2,000 for a questionable coin was a lot of money,” he wrote. “It was to my chagrin that in 1991 the [Abraham] Bromberg specimen sold at auction for $242,000.”

The prototype was sold in the first part of the Bromberg auction, a sale that also included the quarter shekel, which realized $253,000 in that sale.

Silver quarter shekels from the Jewish War are extremely rare, with five examples known, two from Year One and three from Year Four, according to Hendin’s book.

The Year One example from the Shoshana Collection is the better example, with the second example featuring a repaired hole (the coin is part of a private collection in Israel.)

The difficult circumstances of that time period might explain why quarter shekels were never struck in significant numbers, according to the catalogers, noting the existence of some bronze examples.

The silver quarter shekel measures 16 millimeters in diameter and weighs 3.13 grams, or slightly smaller and heavier than a U.S. dime.

The ritual chalice appears on the obverse, and a staff with three pomegranate buds is shown on the back, with the Jerusalem is Holy legend.

In Choice Very Fine condition, the quarter-shekel had an estimate of $850,000. ¦