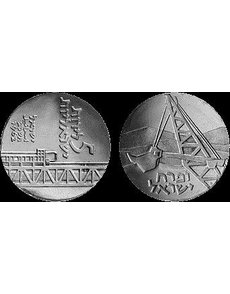 Israel’s 1964 5-lirah commemorative coin is part of a series of the nation’s coinage that reflects the nation’s growth following independence.

Images courtesy of The Shekel and the Israel Coin and Medals Corp.

The first 16 of Israel’s annual independence anniversary issues are all struck with “dramatic concave surfaces, giving a unique depth and sparkling luster unlike any other world coin issued up to that time,” writes Mel Wacks in the September-October issue of The Shekel, the bimonthly magazine for the American Israel Numismatic Association.

The colorful magazine, now 44 years old, reports on news and events and presents features unveiling the history of Israeli numismatics.

The latest issue continues an in-depth review of Israel’s first series of Commemorative coins, created by the young nation’s best artists and graphic designers, according to the journal article.

From science research to mining, shipping to refining, the first decades of modern Israel witnessed an economic phenomenon. This growth is evidenced on 5-lirah commemorative coins that, according to Wacks, are relatively easy to find and inexpensive to purchase.

Zci Narkiss’ design for the 1962 issue, one of two from the designer, was inspired by a scripture found in the book of Isaiah: “Israel shall blossom and shall bud, and fill the face of the earth with fruit,” which the designer took to refer to the mineral and industrial wealth recovered from the otherwise forbidding landscape in the Negev desert region in southern Israel, according to Wacks.

The obverse depicts equipment recalling the region’s petrochemical production, while the reverse shows a large power shovel at work.

Other articles in the latest issue of The Shekel explore emergency bank notes of the 1967 war, extremely rare prototype bank notes from pre-statehood, the history behind Jewish contributions to the development of the astrolabe, as well as a look at the American Numismatic Society’s major exhibit of Holy Land coinage, and more.

The Shekel is mailed every other month to all members of the American Israel Numismatic Association. Membership is $25 per year in the United States, Canada and Israel, $35 annually to all other countries. Membership privileges also includes AINA’s annual commemorative medal.