The Research Desk: Barnstormer for Soldiers of Destiny 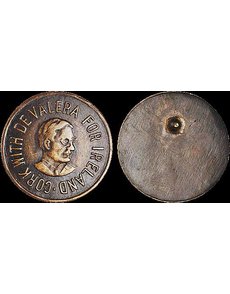 The enigmatic uniface 28.8-millimeter medalet bears a shaggy-haired man’s bust with heavy spectacles and legend CORK WITH DE VALERA FOR IRELAND. Its concave back bears an integral nipple that may have been a mount for wear during an Irish election in the late 1920s or 1930s.

Eamon De Valera (born New York 1882, died Dublin 1975) was then barnstorming for his Fianna Fáil (Soldiers of Destiny) party, and this bronze piece is probably a political issue.

Discovering something new excites a dedicated collector, especially if it involves a country whose coins and medals are as well charted as those of modern Ireland. That country’s first national coinage appeared in 1928 to worldwide applause for its simplicity and beauty of design. For the next 40 years, all Irish coins bore the Irish harp and a selection of birds, fish and mammals charmingly depicted by artist Percy Metcalfe. The decimal coinage introduced in 1969 continued many of these familiar designs.

Irish tokens and medals certainly exist, but have received minimal study in Ireland and are generally unfamiliar to American collectors. Medals are few and far between, especially since the violent era of the early 1920s.

Political life in Ireland was in ferment as World War I broke out in August 1914. Irish Home Rule was resisted in the northern counties of Ulster, and the nationalist Irish Volunteers split over the role Ireland should play in the war. The Easter Uprising in Dublin in 1916 began a war for independence that was supposed to end with the 1922 Anglo-Irish treaty.

Many able men died in this fratricidal struggle, including Collins. The Free State emerged victorious only at terrible cost, heading the Irish government, and ultimately forming the Fine Gael Party.

Defeated Republicans coalesced around De Valera in the Fianna Fáil (Soldiers of Destiny) Party in March 1926 and would rule for 61 of the next 79 years.

Campaigning in the late 1920s was risky. Memories were painfully fresh of the death of Michael Collins in a County Cork ambush, blamed on De Valera. Republicans never forgot their enemies’ retaliatory shooting of prisoners.

Wearing such a De Valera button, especially in County Cork, could well have invited a bullet. This reality might account for the rarity of such buttons today.

David T. Alexander is author of American Art Medals, 1909-1995 and a fellow of the American Numismatic Society. He is a longtime numismatist and researcher.