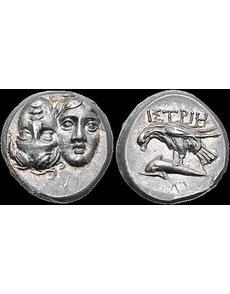 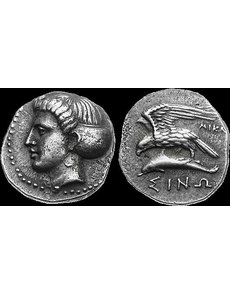 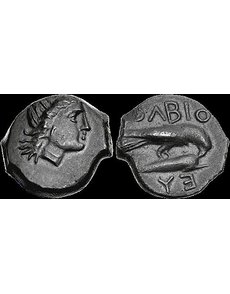 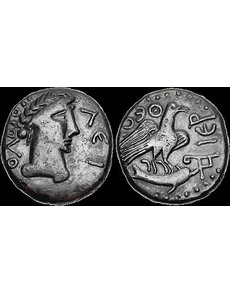 Three ancient cities along the shore of the Black Sea — Olbia, Istrus and Sinope — used an unusual design for their coins, an eagle perched on the back of a dolphin.

This type was not only rarely (if ever) used elsewhere in the Greek world, but was a principal design that came to be emblematic of the coinage of these three cities.

The origin and meaning of this design is not recorded. In conventional religious terms, the eagle represented the supreme Greek god Zeus and the dolphin symbolized the sea-god Poseidon, or perhaps Apollo Delphinios. The scholar V.F. Stolba suggests the composition may present a union of the celestial realm of the sky and the “underworld,” perhaps uniting male (sky) and female (aquatic) elements. Alternatively, it may simply have reflected the marine resources of these port cities.

Since this design was used over a long period of time at three different cities, its treatment is variable. Usually the eagle rides amiably on the back of the dolphin, whereas other times it appears to clutch aggressively, or even to peck at the dolphin’s head. On some issues of Olbia the eagle is shown with its head fully upward or with its wings fully displayed, as if it is standing, with the dolphin appearing merely to be an afterthought.

The range of treatments makes it difficult to determine the nature of the relationship between the eagle and dolphin. It is possible — if not probable — that people in ancient times would have offered a variety of explanations.

This coin type originated at Sinope, with the earliest coins of that city showing the head of an eagle over the body of a dolphin. This is merely an abridged version of the full design. Sinope appears to have used that design from about 490 to 410 B.C., with the artistry ranging from simplistic and crude to realistic presentations that are enchantingly beautiful.

On those early drachms of Sinope the eagle head-over-dolphin design was the obverse type, with the reverse being a simple incuse punch. In about 410 B.C. Sinope updated its coinage considerably. The eagle head was expanded to show the bird in full form with wings aloft, perched upon a dolphin.

In its new form, the Eagle-Dolphin design became a standard reverse type at Sinope, with the obverse bearing the head of the local nymph. This series of coins appears to have been struck from about 410 to 300 B.C. under a series of magistrates, whose names appear between the eagle’s wings and tail.

Copies of these Sinope drachms were struck by several rulers who placed their names in the field beneath the dolphin. One of them, Datames, inscribed his name in Greek, whereas others used the Aramaic language. Some of the names in Aramaic defy easy translation, but the most common type is ascribed to a ruler named Ariarathes.

Though the Eagle-Dolphin design had originated at Sinope in a truncated form, the full form of the type may have appeared first on coins of Olbia, a Scythian settlement on the northeastern shore of the Black Sea. The first Olbian coins with this design — large, cast bronzes with a facing gorgon head on their obverse — are thought to have been produced as early as 437 B.C.

Y.G. Vinogradov suggests the occasion for the new coinage was the expedition of the Athenian statesman Pericles to cities of the Black Sea to promote his city’s interests in the region. The journey is traditionally thought to have taken place in about 437 B.C., though many scholars place it somewhat later.

If the political explanation for the type offered by Vinogradov is valid, the gorgon head on the obverse would represent the protective amulet of Athena, the eponymous goddess of Athens. The eagle on the reverse would represent Zeus’ role as a Greek, democratic force that came to dominate the dolphin of Apollo Delphinios, symbolic of the old rulers who consequently were driven out of favor at Olbia.

This is a compelling idea for the circumstances at Olbia, yet it is difficult to explain how this distinctive imagery would find context at Istrus and Sinope — especially since the earlier coins of Sinope likely were the prototype for this design, and it would have had its own explanation, generations before Pericles embarked on his mission.

At Istrus the Eagle-and-Dolphin design had the longest run of any of the three cities: it first appeared on silver coins of the early fourth century B.C. and was still being used on bronzes issued under Roman rule in the mid-third century A.D.

The most noteworthy issues of Istrus were silver drachms struck in enormous quantities in the fourth century B.C. They show on their obverse the inverted, facing heads of two young men, and on their reverse the Eagle-on-Dolphin motif.

As if the meaning of the Eagle-on-Dolphin design wasn’t mysterious enough, the obverse design of these coins is equally controversial. Many theories have been offered, including that the young men are the Dioscuri, are the branches of the Danube River, are the directions of trade routes or prevailing winds, or that they represent the rising and setting of the sun. The astronomers W.C. Saslaw and P. Murdin have even suggested the heads are the Greek sun-god Apollo shown in an odd manner to mark a total eclipse of the sun in 434 B.C.

The reverses of these drachms are strikingly similar to the contemporary silver drachms of Sinope. Both have the Eagle-on-Dolphin design, a Greek inscription naming the issuing city (at Sinope it is below the scene, at Istrus above), and most every drachm also names a magistrate who, presumably, was responsible for the coinage.

One of the late bronzes of Istrus, struck under the Roman Emperor Septimius Severus (A.D. 193 to 211), exemplifies how the Eagle-on-Dolphin remained a potent symbol of this city more than five centuries after its initial usage. This coin shows on its reverse a standing figure of Tyche — the Greek goddess emblematic of cities — at whose feet rests a miniature dolphin with an eagle perched on its back. ■