Dutch token from charity that provides food to poor 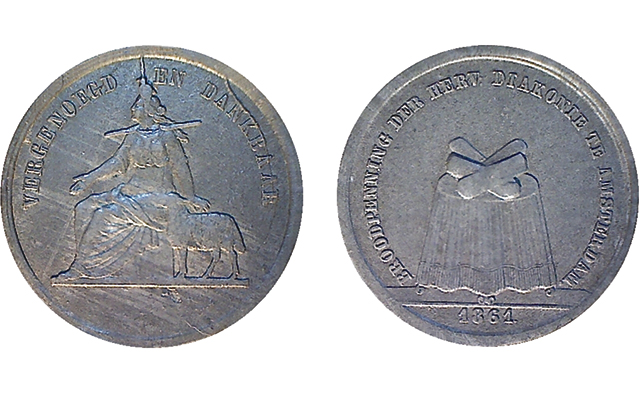 This token was incorrectly described as a communion token in an auction lot, but is actually a charity token from the Netherlands. The token was issued by a local church in Amsterdam, and stems from efforts to feed the poor.

I bought this token in a lot; it was described as a Dutch communion token, which it is not. All I’ve been able to determine is that it’s a bread token. Can you tell me anything more?

Why were they issued? Do the four loaves (as opposed to one, two, or three, which I’ve seen online) on the reverse have any significance?

Any info you can provide is appreciated.

The reader shared images of what is actually a white metal charity token from the Netherlands.

Hobby researcher O.P. Eklund writes about similar pieces in Charity Tokens of the Netherlands, a reprint of articles that appeared in The Numismatist in the 1940s.

According to dealer Paul Bosco, who specializes in world exonumia, these tokens were not necessarily bread tokens in the traditional sense (where a token might be “good for” a loaf) but represented food being given to the poor.

“It is Dutch, of course, and it could be considered the last in a long line of such pieces, issued by churches/parishes back to the 1500s,” Bosco said.

The token is made in bronze, silver and lead, and, as the reader noted, with different numbers of loaves. Fred Drost, in a 1976 article in Journal of International Numismatics, suggests the four loaves version is double-struck.

A similar token is described in Eklund’s work. One side of the token shows the seated figure of Charity, with a dove perched upon her head and a lamb standing beside her. The side with the lamb includes a legend, vergenoegd en dankbaar, which translates to “content and grateful.”

The legend on the other side is BROODPENNING DER HERV. DIACONIE TE AMSTERDAM, which means “Bread token of the Reformed Poor-Relief Board of Amsterdam,” according to Drost.

The 1861 date apparently represents the date the charitable organization was founded and not when the token was issued.

According to Bosco, examples of this token appeared on the market in some quantity (in Very Fine to Extremely Fine), about 35 years ago, and today it should still sell for $10 to $20.

Dealer Paul Cunningham, who also specializes in tokens and medals, points out the reason such exonumia can be so enjoyable.

“Collecting tokens and medals is a great hobby because you can run across things like this and enjoy the hunt for THE TRUTH of what it is, what it was used for, when and why, and so on,” Cunningham said.