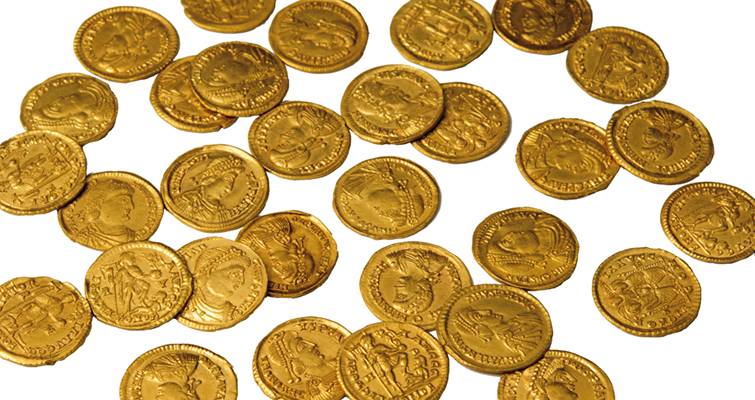 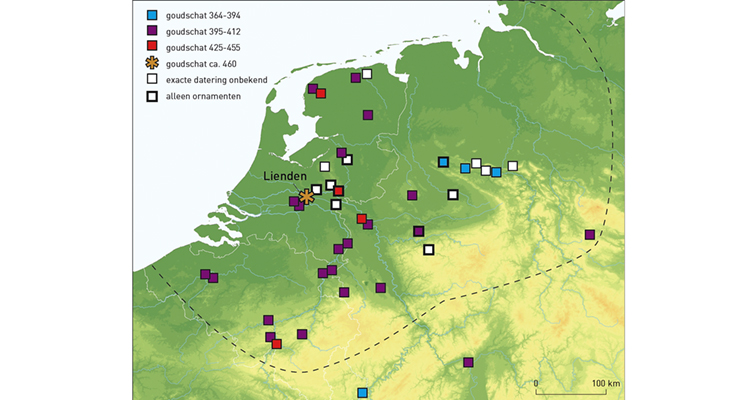 This map shows the distribution of Late Roman gold hoards in the Low Countries and surrounding regions in northwestern Europe. 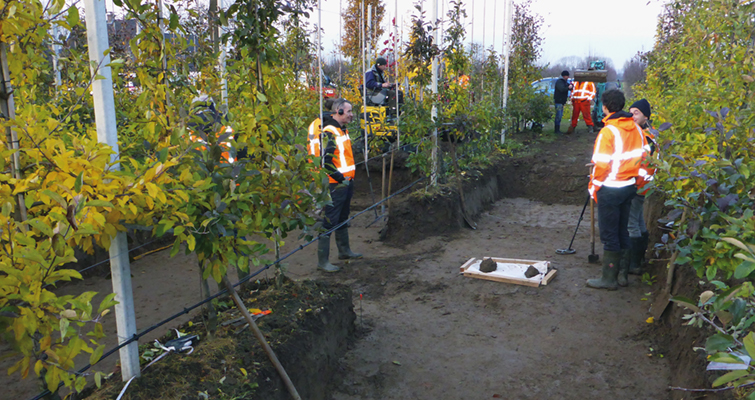 The excavation of the hoard location in a fruit orchard in Lienden, the Netherlands, during November 2016 by Vrije Universiteit and Public Service for Cultural Heritage. 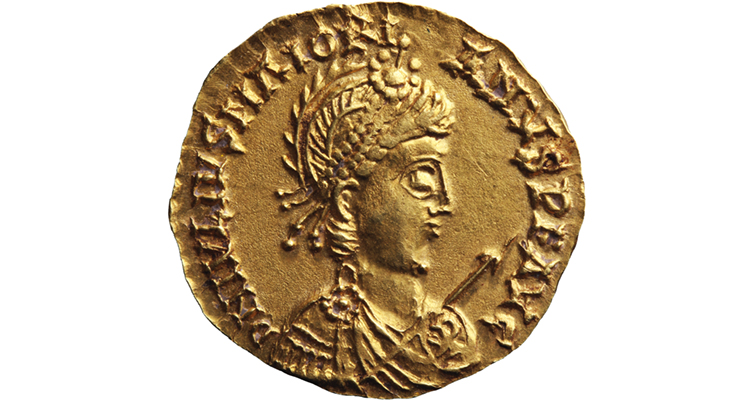 The obverse of a gold solidus of emperor Majorian (457 to 461 A.D.) from the Netherlands’ National Numismatic Collection. The emperor is the latest ruler represented in the 2016 hoard. 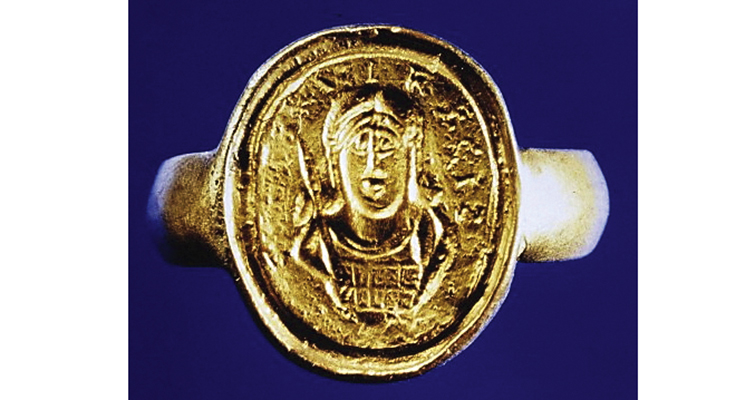 A signet ring from the grave of the Frankish “king” Childerik I, with his portrait. He fought for control of area that is now part of the Netherlands in the 460s.

A hoard of gold coins found in the Netherlands in 2016 has recently come to light.

In 2016, treasure hunters discovered 23 gold coins from the late Roman Empire in an orchard in Lienden, in the Dutch province of Gelderland.

The gold solidi were struck in the late fourth and fifth centuries.

The Lienden treasure is the largest known solidus treasure from the Netherlands and represents the latest issue of Roman coins that circulated in the Netherlands, having been buried around 460 A.D.

The treasure serves as a unique document of the transition from Roman times to early Middle Ages and marks the end of Roman authority in southern Netherlands.

It may have also been buried in a tomb hill from the Bronze Age, which would add additional significance.

The treasure find marks one of the first instances where the Netherlands’ new system for documenting treasures was employed.

In 2016, the Portable Antiquities of the Netherlands system, PAN, was launched by Vrije Universiteit as a means for recording archaeological findings made by private individuals searching with metal detectors.

Officials confirmed that two searchers in 2012 had located eight gold coins at the same site when the area was plowed to allow planting of the orchard.

Through additional research, officials determined that a number of gold coins were found in the same site in the 1840s.

The 2016 discovery brings the total of known pieces located at the site to 42 coins, but surely others exist that are unknown, according to Stijn Heeren, the coordinator of Portable Antiquities of the Netherlands.

The coins were issued from 375 to 457, and the treasure was reportedly buried around 460, just 16 years before the western Roman Empire ended.

Constantinus III, who reigned from 407 to 411, is the most-represented ruler in the hoard, with 12 coins from his tenure.

Context of the hoard

After being alerted to the 2016 find, archaeologists with the Vrije Universiteit and the Rijksdienst for the Cultural Heritage excised a small excavation at the same spot, attempting to determine if more coins or jewelry was at the site.

Additionally, searchers hoped to determine whether the coins had been buried in a jar, pouch or other container, and in what context the treasure was buried, in a house or with a person. The latter scenario was a possibility, because the finder of the 2016 treasure also located human bones near the coins.

The archaeologists failed to find additional coins, or jewelry, or evidence of a pottery or metal container, suggesting that the treasure was hidden in a pouch (long since disintegrated).

Unburned bone fragments from three distinct humans were located at the site, as well as a cremation grave with an urn. In a development that surprised archaeologists, some of the bones were carbon-dated to circa 1800 B.C., meaning there was no relation between the bones and the coin hoard.

The cremated remains are much younger, probably from the Iron Age.

Evidence suggests that the site was once on the outskirts of a settlement, and that it could have been a burial mound.

If that were the case, the identifiable hill would explain why the site was chosen for secreting the hoard by someone who had hopes to locate and retrieve it later

The treasure of Lienden must be understood within the context of gradual disintegration of the western Roman empire in the fifth century, according to Stijn Heeren.

The increasing dependence on Germanic groups in the region, including the Franks, played an important role in this regard.

Roman emperors could have paid the Frankish leaders with the gold coins in exchange for their military support during the late fourth century. Those leaders could then distribute the coins under their own authority.

The latest find aligns with earlier treasure knowledge in the Netherlands. Much of the gold coin hoards previously discovered were located north, south and west of the Rhine River.

The spread of these gold discoveries reflects final attempts by Roman authorities to control the Maas and Rhine Valley, attempts which relied upon an extremely late influx of Roman gold.

That influx can be explained by the relationship between Emperor Majorianus and Aegidius, an Anglo-Gallic leader in Gaul under the emperor.

Aegidius supported Majorianus, who was deposed by Ricimer, at which point Aegidius began waging war against the Visigoths. Aegidius refused to work with Ricimer and soon faced allies of Ricimer who forced him to retreat to an area around Paris where Aegidius formed an independent Gallo-Roman Empire called Soissons.

In 463, with the assistance of Frankish allies under the leadership of Childerik, Aegidius defeated the Visigoths in battle at Orléans. Aegidius likely used the discovered coins to pay his Frankish allies, according to Heeren.

The next year Aegidius was poisoned, but the kingdom he had founded continued until it was taken in 486 by the Franks under Clovis.

According to Heeren, the Dutch approach to found treasure is quite similar to the United Kingdom’s (which also has what it calls a Portable Antiquities Scheme), although there is no treasure trove law in the Netherlands.

In the United Kingdom, handing over important finds (for money in return) is mandatory, and the declaration of other finds for scientific recording is voluntary. In The Netherlands, declaration of all finds is mandatory — all finds must be shown to archaeologists. After that, the finder and owner of the property share the value, and they can either keep or sell the find at will; there is no obligation to sell the treasure to museums as required in the United Kingdom.

In the current case, all the finders followed all the rules, plus they offered all the finds to a museum for at least five years (they may sell later). The owner of the property and the finders contributed to an excavation.

Full details of the system can be found online at a dedicated website. 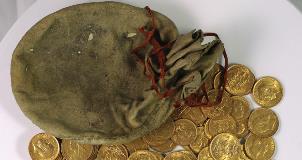