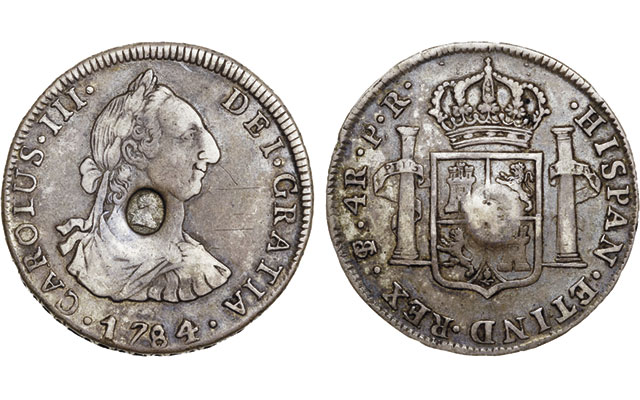 A coinage shortage in England in the late 18th century led Bank of England officials to counterstamp silver world coins. 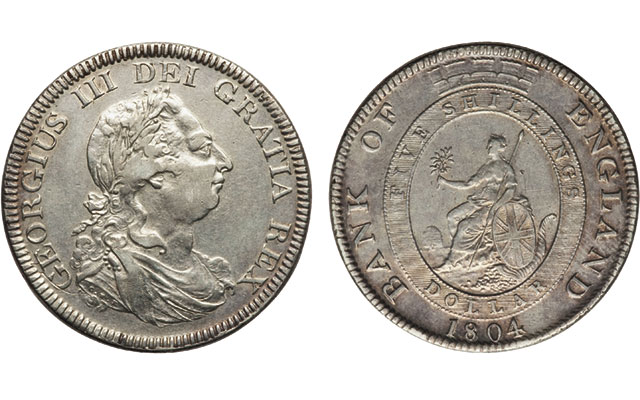 Eventually, the Bank of England struck silver dollars in 1804, bearing a new design altogether, over earlier counterstamped coins. The coin’s denomination was also noted as five shillings, as seen on the reverse.

Editor's note: The following is the fourth of a five-part Coin World series about collecting emergency coinage, prepared by Jeff Starck for the March 2015 monthly edition of Coin World.

Sometimes an emergency is too big for a response like James II’s in 1689 and 1690. Unquenchable demand for silver coinage in late 18th century England forced authorities to act, and striking more coins was out of the question.

The Bank of England in 1797 responded by adding an oval countermark to foreign silver coins, mostly Spanish 8-real coins from the Spanish-American mints of Mexico City, Lima and Potosi, according to Peter Seaby in The Story of the English Coinage.

As in the United States, the Spanish dollars were cut into fractions and used as smaller denominations in Britain. Even some U.S. silver dollars were marked with the counterstamp.

Soon counterfeits of the countermark on coins proliferated, and in 1799 a new, octagonal countermark was introduced. In 1800 the countermarked coins were revalued to 5 shillings, and in 1804 the Bank of England decided to overstrike a new design on the coins.