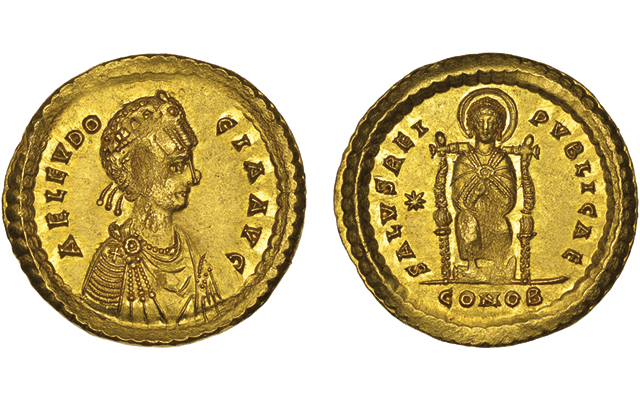 Eudocia was wife of an emperor of the eastern Roman Empire and later a ruler of Palestine in her own right.

The coin was struck in Constantinople in the fifth century and was probably a special commemorative piece given to courtiers for services to the imperial family. Eudocia is depicted wearing her imperial regalia on the obverse, while on the reverse she is shown enthroned and wearing a halo, a symbol of sovereignty, enlightenment and divinity.

According to the auction firm, Eudocia was an extraordinary woman who deserves to be more widely remembered.

Born in Athens, she traveled to the court of Theodosius II, emperor of the eastern part of the Roman Empire, in Constantinople in 420 to challenge her father’s will. Theodosius fell in love with her and she married him in 421. The dynastic title Aelia was added to her name.

Theodosius gave Eudocia imperial powers previously held by his sister Pulcheria and struck coins depicting his wife. These are part of the transitional coinage bridging the changeover from the late Roman to the Byzantine eras.

Pulcheria was angry that her powers had been handed to Eudocia and this provoked a bitter dispute between them.

In 441, several years after the double solidus in the auction was struck, Eudocia was accused of adultery, probably falsely, and banished, according to the auction house.

Eudocia went to Jerusalem and, as the most senior member of the imperial family living in Palestine, became ruler of the province. She protected all religions from the discriminatory laws imposed by her husband and oversaw the construction of major public buildings, according to Dix Noonan Webb. After her death in 460, Roman historians ignored Eudocia because she was said to have fallen into disgrace, but the people of Palestine honored her memory, the firm indicated.