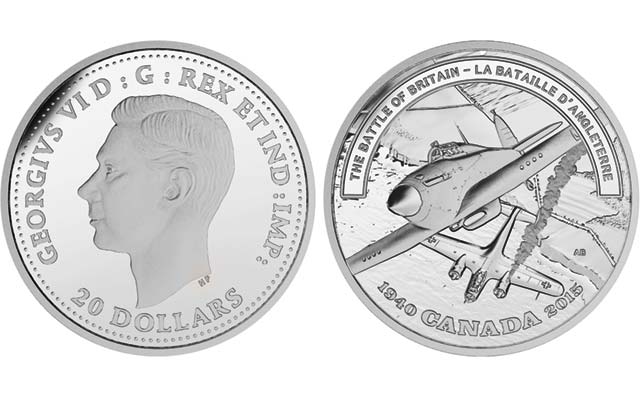 A dogfight over Dover appears on the Royal Canadian Mint’s first Proof silver $20 coin in a World War II series.

During the summer of 1940, the German Luftwaffe waged an ultimately unwinnable campaign to dominate the skies above the United Kingdom.

Canada’s effort to assist the British Royal Air Force during the Battle of Britain is the theme of a new coin from the Royal Canadian Mint.

The 2015 coin is the first in the Second World War Battlefront Series, which depicts scenes from key battles in which Canadians participated during World War II.

The Proof .9999 fine silver $20 coin features a reverse design by Canadian artist Ardell Bourgeois depicting Canadian involvement in a dogfight in the skies above Dover.

At the helm of a Hawker Hurricane, a Canadian fighter pilot ascends after firing upon a Dornier Do 17Z — the enemy plane has seemingly dropped in altitude as a trail of dark smoke billows up from one engine. Well below the fighter planes, the background recreates England’s southeastern coast, where the waters of the English Channel meet the famous White Cliffs of Dover.

An effigy of King George VI appears on the obverse of the coin.