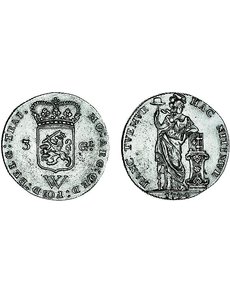 One of the highlights the Dix Noonan Webb auction offers is a 1794 silver 3-gulden coin issued by the United West India Co.

Dix Noonan Webb’s Sept. 28 world coin auction is the third of four auctions scheduled for the week of Coinex, what is billed as the United Kingdom’s largest annual coin show.

One of the highlights among the offering of 560 lots of coins, many of which are from the Edward Roehrs Collection, is a 1794 silver 3-gulden coin issued by the United West India Co.

Cataloged as Krause-Mishler 4 (Standard Catalog of World Coins by Chester Krause and Clifford Mishler), the coin is one of perhaps as few as 20 pieces surviving from the original mintage of 1,226, with four of those impounded in public collections, according to the auctioneer.