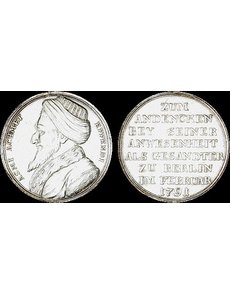 The arrival of the first permanent Ottoman Turkish ambassador to the kingdom of Prussia in 1791 is remembered by two exotic silver commemorative medals struck by Daniel Friedrich Loos in his private medallic mint in Berlin.

European ambassadors and envoys were generally wealthy and well-educated noblemen who went about in great state, accompanied by retinues whose magnificence reflected the glory of the sovereign they represented.

Since the 1400s, war between the European powers and “the Sublime Porte,” as the Turkish sultan was known, was more or less continuous. After a series of significant defeats by Russia and Austria in the fighting of 1787 to 1792, Ottoman Sultan Selim III (1789 to 1807) set about modernizing his ramshackle realm and securing relations with European powers.

Internally, the empire was descending into chaos as the powerful Albanian vassal Ali Pasha of Janina set up his own court and diplomatic service after 1788. Up to this point, the Ottomans spurned normal diplomatic contact, permitting European ambassadors in Constantinople, but freely harassing and insulting them at will. This was now to change as Ottoman envoys arrived in the chaos of revolutionary France and the austere militaristic kingdom of Prussia.

The ambassador to Paris had the more scintillating role. In great demand at public and private functions, he handled such challenges as the entrancing women’s fashions of the day with aplomb. Introduced to one of the belles of fashion in her gauzy see-through bodice he exclaimed in exotically accented French, “Public beauty!”

Staid Berlin offered no such challenges, and if Ambassador Asmi Achmet Effendi is recalled at all today, it is for his two silver medals.

The other known medal is inscribed “Monument (Remembrance) of the Turkish Ambassador to Berlin in February 1791.” Neither medal is a great rarity.

After suffering defeats in Napoleon’s invasion of Egypt and facing mounting opposition to his attempts at modernization, Selim III was overthrown in 1807 by Janissary troops and his empire continued its slide into oblivion.

David T. Alexander is a Senior Numismatist and researcher for Heritage Auctions, at davida@ha.com. He is author of American Art Medals, 1909-1995.