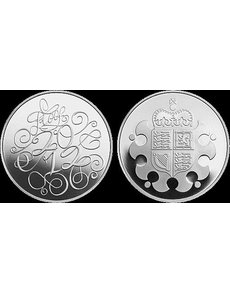 A special copper-nickel medal is included in 2012 Premium Proof sets from the Royal Mint in Great Britain. 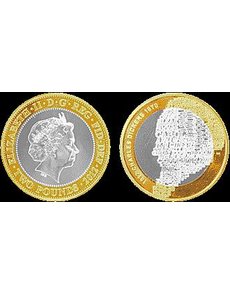 The issue of a new circulating £2 coin from the Royal Mint, it might be said, is one way to coin a phrase.

Titles of some of the author’s most famous works were arranged to create a profile of literary giant Charles Dickens on the new coin’s design, in celebration of the 200th anniversary of his birth. The coin is now available individually and as part of annual sets.

The titles of the works range from his early writings, Sketches by Boz, to his final and unfinished novel, The Mystery of Edwin Drood.

Artist Matthew Dent laid out the titles in the design to create “a uniquely styled bibliography of Dickens’ literary masterpieces, referencing much loved classics including David Copperfield, Oliver Twist, Great Expectations and A Christmas Carol,” among others.

The edge inscription, SOMETHING WILL TURN UP, is a quote from the ever optimistic Wilkins Micawber in David Copperfield, Dickens’ own favorite story. A character based on Dickens’ own father, Micawber’s name has become synonymous with someone who lives in hopeful expectation.

Dent said that in creating his design, he wanted the design “to reference both the immense contribution Dickens has made to British literature and his iconic portrait.”

The portrait was based on a bust of a bearded Dickens that is part of the collection of the Charles Dickens Museum in London. The typography that gives the portrait its form uses several different typefaces, from ones that would have existed during Dickens’ lifetime, to ones that were designed since his death, “symbolic of the enduring popularity of his work,” according to the Royal Mint.

Dr. Kevin Clancy, director of the Royal Mint Museum, said: “Matthew’s design is both clever and subtle, playing with the importance of words to the extent that the portrait of Dickens is created from the titles of his own works.”

One of Britain’s best-loved authors, Dickens was born Feb. 7, 1812, and spent an idyllic childhood, first in his birthplace of Portsmouth and later in Chatham, Kent. The family then moved to London where later his father was incarcerated for debt and the 12-year-old Dickens put to work in a blacking factory.

Deeply interested in social reform, he embarked on a career as a journalist at the True Sun radical newspaper, and as “Boz” wrote short stories for the Morning Chronicle.

“His experiences along with his rich imagination, exhilarating humour and powerful social sensibilities were used to create enthralling stories with wonderfully extravagant characters in which life in Victorian London, at once vibrant and pitiless, was vividly exposed,” according to the Royal Mint.

His novels were tremendously popular during his lifetime and are widely read today around the world, some of his characters becoming true icons of English literature.

The £2 coin is a ringed bimetallic piece with a copper-nickel center surrounded by a nickel-brass core. The coin weighs 12 grams and measures 28.4 millimeters in diameter.

The coin will enter circulation in the United Kingdom in spring. Brilliant Uncirculated examples of the Dickens £2 coin are already available individually or among many of the annual sets released Nov. 29 by the Royal Mint.

Packaging for the individually offered BU version includes a colorful presentation folder detailing the life and works of Charles Dickens and giving information about the coin design. The BU version has unlimited mintage and is priced at £8.50 apiece.

The BU version is one of two commemorative coins included in a set of BU coins dubbed the “2012 Commemorative Great British Coins,” which also includes eight definitive or standard circulating coins (from 1 pence to £2).

The other commemorative coin in the set is the £5 coin celebrating Queen Elizabeth II’s Diamond Jubilee, with a design officially unveiled Oct. 11 (Coin World, Oct. 31 and Aug. 29 issues).

The obverse of all the coins continue to feature the familiar portrait of Queen Elizabeth II designed by Ian Rank-Broadley.

The 10 BU coins are housed in an illustrated folder providing the background behind the coin designs. The set has no mintage limit and costs £39.

Another BU set, lacking the two commemorative coins, is titled simply “2012 Great British Coins” and offers the eight circulating coins in a similar illustrated folder. The set costs £20.50 and has an unlimited mintage.

The 2012 Collector Proof set, presented in a black year-dated display case with a colorful, informative booklet and a certificate of authenticity, offers Proof examples of the eight circulating coins and the £2 and £5 commemoratives. It is limited to 30,000 sets, which cost £55 each.

The 2012 Premium Proof set features the same coins but in different packaging — a walnut-veneer case with “its own pair of numismatist gloves”— and, additionally, a copper-nickel Royal Mint medal, exclusive to the set.

The size of a crown, the medal is struck with the Royal Mint emblem on its obverse, and it has a decorative 2012-themed reverse.

A colorful booklet and certificate of authenticity are also included in the set, which is limited to 3,500 sets priced at £99 each.

Royal Mint officials have not confirmed when or whether silver Proof sets will be issued as they have been in recent years.