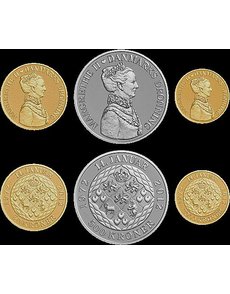 Denmark celebrates the 40th anniversary of Queen Margrethe II’s accession to the throne Jan. 14, 1972, with four 2012 coins. A 20-krone coin, left, is being released both for circulation and in a Proof collector version, along with a Proof .925 fine silver 500-krone coin, middle, and Proof .900 fine gold 3,000-krone coin, right.

All images courtesy of Danmarks Nationalbank.

Queen Margrethe II took a significant role in designing the coin, according to the Royal Danish Mint.

The obverse of the coin shows a relief bust of the queen in an official role as sovereign of the two royal orders of chivalry — the Order of the Elephant and the Order of Dannebrog — in a new portrait for Danish coins.

The portrait was designed by sculptor Karin Lorentzen, who has also designed several other coins, including the coin for the wedding of Crown Prince Frederik and Crown Princess Mary in 2004.

On the new 40-year anniversary coin, “[I] sought to portray the queen with wisdom and human warmth,” Lorentzen said. “It has been modelled with a naturalistic expression with more loosely modelled ornamental elements/additions.”

Queen Margrethe II is wearing a dress with a fur collar that “despite its official appearance, has an outdoor quality about it. This choice of clothing reflects an active queen who appreciates her annual trips to Greenland, the Faroe Islands, etc.,” Lorentzen said.

The reverse of the 2012 coin features a design directed by the queen: asked during the design preparatory process if she had special wishes for the reverse motif, Queen Margrethe II reportedly sketched an idea to honor the Faroe Islands and Greenland, in addition to Denmark (which overseas the territories).

Ronny Andersen, royal herald painter, elaborated on the queen’s draft design, resulting in a composition that includes elements from the royal coat of arms, including the Faroese ram and the Greenlandic polar bear.

The composition is surrounded by waves to symbolize the sea that links the various parts of the kingdom, the queen’s idea. The idea for the final design, in which the composition is framed by waves in a diamond-shaped field, also came from the queen, according to the Royal Danish Mint.

The 20-krone coin is available both in a circulating version available at face value and a Proof version offered at a collector premium. The two other Proof coins are also offered at their face values.

A total of 750,000 20-krone coins are being issued for circulation; 20-coin rolls are offered at face value from the Royal Danish Mint.

The Proof version of the 20-krone coin was sold for 125 Danish krone during a 30-day window that closed Jan. 16.

The Proof silver 500-krone coin weighs 31.1 grams (1-ounce) and measures 38 millimeters in diameter, while the Proof gold 3,000-krone coin weighs 8.65 grams (for an actual gold weight of a quarter-ounce) and measures 22 millimeters in diameter. Both of these coins are available at their face values. No mintage limit information was available for the Proof precious metals coins.