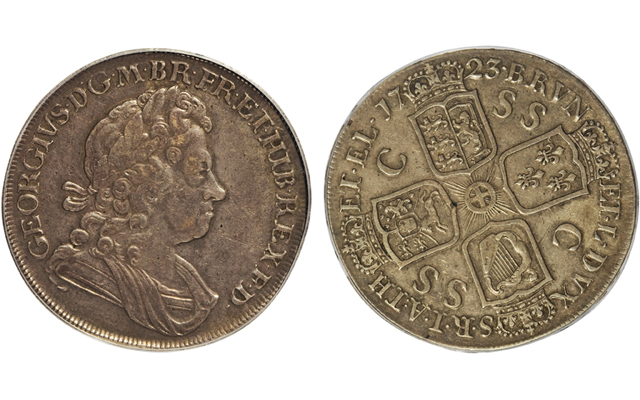 The South Sea Company was at the center of the first recorded modern stock bubble. The bubble burst in 1720, but the company was revived, and silver coins from metal obtained by the outfit, with initials SS and C alternating on the reverse, were struck in 1723.

Editor's note: The following is the third of a multi-part Coin World series about the secret language of British coins prepared by Jeff Starck for the January 2015 monthly edition of Coin World. See links to the rest of the series at the end of this post.

Coins of a financial bubble

One instance of bullion source markings relates to the first stock market bubble in modern history.

Long before Charles Ponzi developed his famous scheme to defraud investors, and the stock market crash that sent America and the world spiralling to the Great Depression, there was the famous South Sea Company swindle.

The company, a public-private partnership, was established in 1711, as England was engaged in the War of Spanish Succession. In exchange for taking on the nation’s debt, the company was promised exclusive rights to trade with South America, according to the Harvard Business School Library website, which provides a deeper overview of the bubble.

There was just one little problem — Spain controlled South America, and when the Treaty of Utrecht effectively ended the war in 1713, England was unable to secure trade access, and Spain retained control over South America.

The South Sea Company made its first trade voyage in 1717, and in 1719 British Parliament converted additional war debt.

The price of the stock remained flat until early 1720, when company officials began spreading rumors about their success and the riches that awaited discovery. Shares soared, from £128 each in January to £550 at the end of May.

Similar bubbles in the market resulted in passage of legislation requiring royal charter for all joint-stock companies, a law proposed by the South Sea Company officials, presumably to squelch competition.

By the end of June the price of South Sea Company stock had soared to £1,050 a share. Then, the collapse came. A sell-off that began in July brought the price down to £800 by the end of August. The share price hit £175 in September, wiping out vast sums of wealth.

An investigation in 1721 resulted in criminal charges. The damage, however, had been done.

In 1723, a limited series of crown, halfcrown, shilling and sixpence coins of George I were struck using metal from a reformed South Sea Company, which mined the silver on the west coast of South America.

To distinguish these pieces from others of the same denomination, the letters SS and C alternately repeat within the four normally empty areas around the shields on the reverse.

They are a collectible reminder of the financial fallout of investment hysteria.